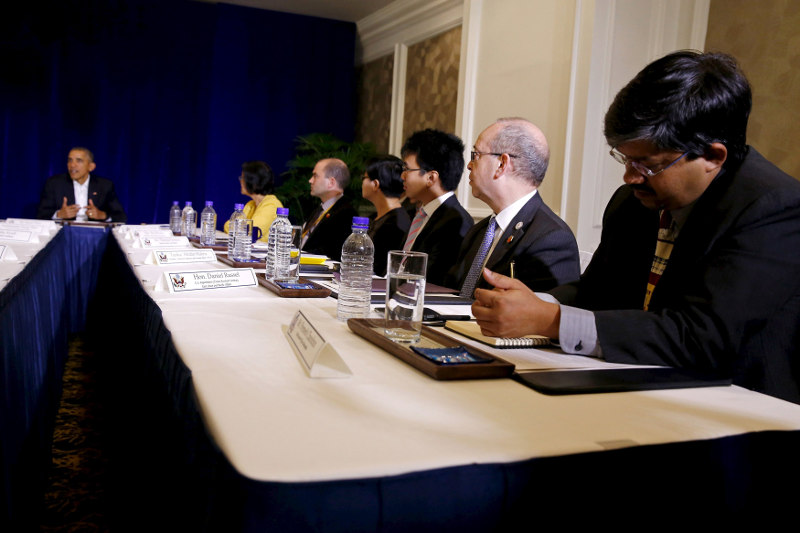 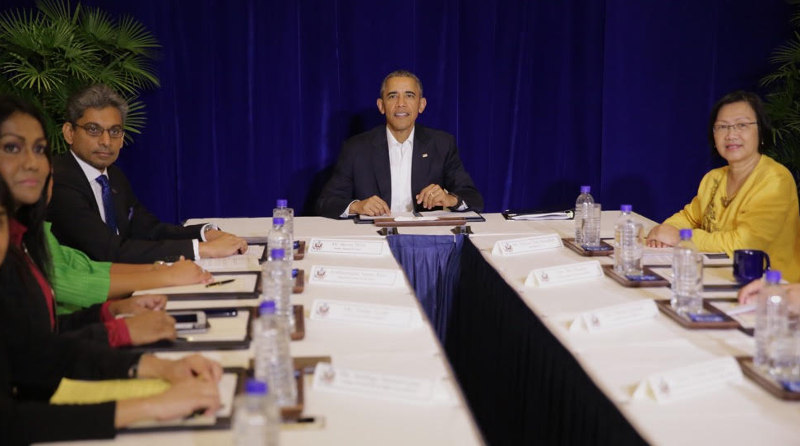 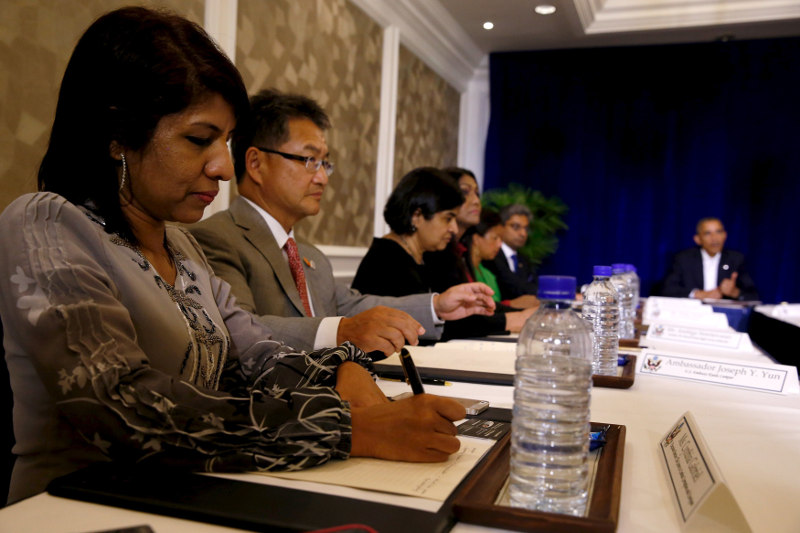 Centre to Combat Corruption and Cronyism Executive Director Cynthia Gabriel (left) and other civil society activists sit down to a meeting with President Barack Obama (right) at his hotel in Kuala Lumpur, November 21, 2015. Also pictured is US Ambassador to Malaysia Joseph Yun (second left). — Reuters pic 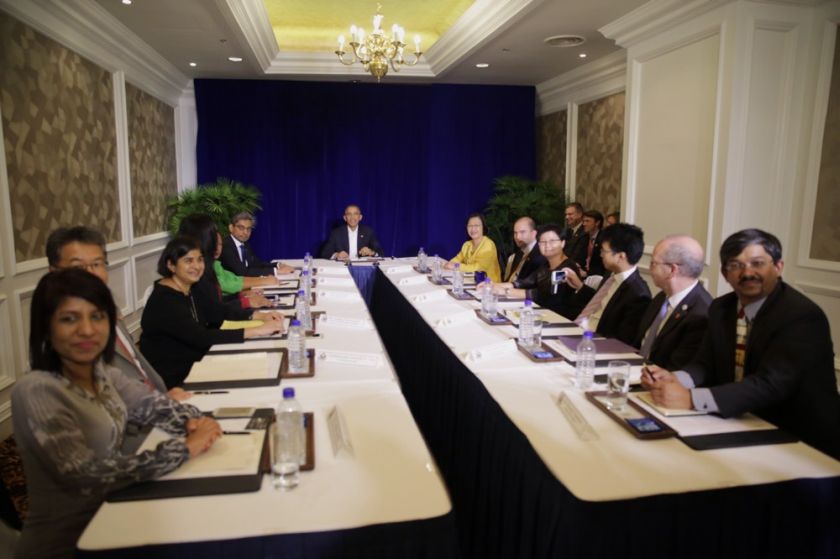 Centre to Combat Corruption and Cronyism Executive Director Cynthia Gabriel (left) and other civil society activists sit down to a meeting with US President Barack Obama (right) at his hotel in Kuala Lumpur, Malaysia, November 21, 2015. — Picture by Choo Choy May 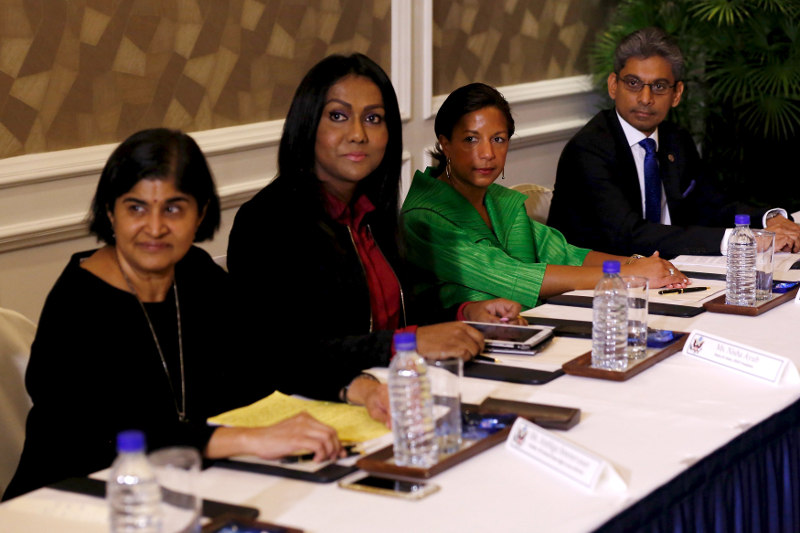 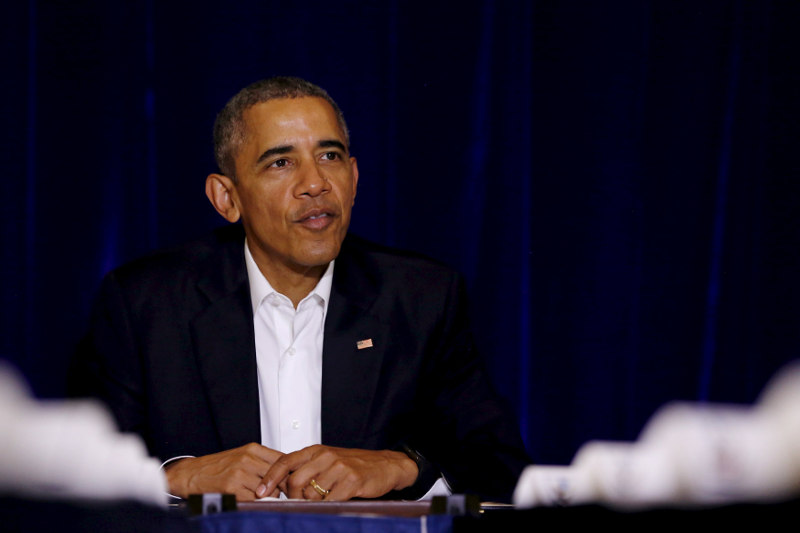 US President Barack Obama delivers remarks before holding a roundtable with civil society activists in Kuala Lumpur, November 21, 2015. Obama is in Malaysia for the Asean Summit and related summits. — Reuters pic

KUALA LUMPUR, Nov 21 — US President Barack Obama was familiar with the problems facing Malaysia including corruption and the erosion in the rule of law, said civil society leaders who met with him today.

Negaraku patron Datuk Ambiga Sreenevasan said they sought to raise as many issues as they were able in the brief time allotted, but said she believed that Obama already knew the salient points of the topics they discussed.

She said Obama also assured them that the US’ dealings with nations accused of abuses did not mean that his country was not concerned over the various issues raised against such governments.

“We raised what you would expect us to raise, which would be the corruption, 1MDB, TPPA, the arrests of civil society members...” Ambiga said when pressed to divulge the topics broached during the rare meeting.

Bersih 2.0 chairman Maria Chin Abdullah then interjected to explain that the arrests they had complained about were those involving civil society groups as well as local lawmakers.

Chin said the arrests were of concern given the proximity of the next general election, claiming that such arrests would prevent the federal and state lawmakers from contesting.

In Malaysia, only convictions that result in prison terms of over 12 months or fines of above RM2,000 result in disqualifications from becoming a lawmaker.

Ambiga also said that they impressed upon Obama the deterioration of institutions and rule of law in Malaysia, citing the alleged interference in the investigations into 1Malaysia Development Bhd, among others.

She said they had pointed out the manner of Tan Sri Abdul Gani Patail’s removal as Attorney-General as well as alleged meddling into the proceedings of the Malaysian Anti-Corruption Commission and the Public Accounts Committee, among others.

“Since the last time he came here, things have gotten worse. We made that very, very clear... ” she said.

Bar Council chairman Steven Thiru, who was also in the meeting, said he had informed the US president of Malaysia’s regression in the rule of law, and that of many of the institutions vital to a healthy democracy.

He said the US could not sit idly by while countries undergo regressions in this area.

“I made a very strong point to him that what we see here today is the unparalleled erosion of the rule of law by people who talk about the rule of law, but really what they mean is rule by law,” he told reporters after the meeting.

Earlier, Chin said she had also highlighted the incongruity between Putrajaya’s globally professed moderation and its actions at home that appeared to encourage extremism, including the tacit support for the pro-Malay “Red Shirts” rally here on Malaysia Day.

Obama met today with several leaders of Malaysian civil society, during which he said the “US stands behind the important work that they are doing on a day-to-day basis.”