Budget 2016: Civil servants to get special assistance of RM500 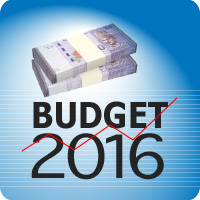 KUALA LUMPUR, Oct 23 — The government will give a special assistance of RM500 to all the estimated 1.6 million civil servants under Budget 2016.

Prime Minister Datuk Seri Najib Razak, who announced this when tabling the budget in the Dewan Rakyat today, said the 700,000 government pensioners would also receive a special payment of RM250.

“Both payments totalling almost RM1 billion will be made in January 2016,” he said.

Najib, who is also the finance minister, said the government would also make improvements in appreciation of the contributions and service of the civil servants.

Najib said the government would set the minimum pension rate at RM950 a month for pensioners with at least 25 years of service, which will benefit almost 50,000 pensioners.

He said the government would also provide benefit of salary adjustment equivalent to one annual increment according to grade, which will benefit 1.6 million civil servants with an allocation of RM1.1 billion.

It would also offer permanent post to contract of service officers who have at least 15 years of service, benefiting 43,000 contract officers.

“All these measures will be implemented effective 1 July 2016 with a total allocation of RM1.4 billion,” he said. — Bernama