Ahead of party polls, PAS ulama wing calls for total wipe out of progressives 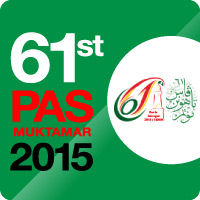 KUALA LUMPUR, June 3 ― PAS's powerful ulama wing have called for delegates to support its list of candidates comprising only conservatives or “professionals” seen as aligned to the clergy class, a move indicative of its intention to wipe out those seen as progressives from the central leadership lineup as the Islamist party heads into election this week.

In its list, which was posted on its Facebook page today, the Ulama Wing urged delegates to continue backing Datuk Seri Abdul Hadi Awang who has been president since 2002 while endorsing Datuk Tuan Ibrahim Tuan Man to oust the incumbent party Number Two, Mohammad Sabu, widely seen as a progressive.

The wing also wanted the conservatives to hold all of the three vice-presidential posts, and endorsed the likes of Kelantan Deputy Mentri Besar Datuk Mohd Amar Abdullah and Selangor executive councillor Datuk Iskandar Abd Samad, both of whom are known to be loyal to Hadi.

The other candidate the Islamist clerics supported is Bukit Gantang MP Idris Ahmad, a professional with strong religious education also seen aligned to the conservative.

Previously the two vice-presidency posts were held by Salahuddin Ayub and Datuk Husam Musa, seen as belonging to the progressives’ camp.

The ulama wing also appeared to be keen on dominating the entire central working committee lineup.

All 18 of the candidates it endorsed for the lineup are either religious teachers or conservative professionals with a strong religious background.

The most notable names in this list are Nasrudin Hassan, Datuk Mohd Khairudin Aman Razali and Dr Zuhdi Marzuki, the men implicated in an alleged attempt to solicit funds for an unspecified project from a political backer and who are also known to be ardent backers of Hadi.

Their conversation on the mobile chat app WhatsApp was leaked just ahead of the party polls in an apparent bid by rivals to discredit their candidacy.

The list of candidates was released just after the Ulama wing urged delegates to use the party polls this week to “renew” the party leadership with leaders aligned to Hadi.

Hadi will have to defend his post against veteran Ahmad Awang, a former vice-president and Perak PAS commissioner, in a one-to-one contest.

Ahmad had said he had decided to enter the fray due to Hadi's hardening stand on hudud, which is alienating PAS from its allies in Pakatan Rakyat.