In plea for Malay unity, Najib opens Umno meet with slides of May 13 riots

KUALA LUMPUR, Nov 27 — Datuk Seri Najib Razak opened the Umno general assembly today by screening slides of the bloody May 13 race riots and the communist attacks in Malaya, in an apparent reminder to the country’s ruling party of the importance of national unity and the dangers of discord among the Malays. 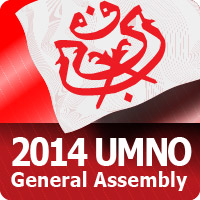 The Umno president and prime minister also said that Bumiputeras will comprise 70 per cent of the population by 2020, and told the Malay party’s delegates to imagine how strong the community would be then.

“Everything that we see today didn’t come easily on their own. Actually, the ups and downs of Malaysia’s journey were full of episodes and events,” Najib said in his policy speech, before screening black and white clips titled “Communist guerrilla attack in Malaya” and “13 May 1969”.

Umno Youth chief Khairy Jamaluddin yesterday urged Malays to rise and defend themselves from a purported onslaught of insults and challenges to their special position in the country, declaring that the country’s predominant ethnic group has been patient enough.

Yesterday, Wanita Umno chief Datuk Seri Shahrizat Abdul Jalil also told Malays at the Umno general assembly that their race would break up if they allowed their faith in Islam to be subverted and if they were disunited in their beliefs.

Najib said today that the key to peace in Malaysia was “solidarity”, a word he repeated throughout his speech.

“The symbol of unity is called solidarity,” he said.

Malaysia is experiencing more visible incidents of communal friction among its various ethnicities.

In July, Umno deputy president Tan Sri Muhyiddin Yassin reportedly said that Malaysia could see another May 13 incident if no efforts were made to preserve inter-ethnic harmony, especially when Malays and Muslims continue to be insulted.

Muhyiddin later clarified that he was not making any threats but merely serving a reminder about the state of the country’s race relations.

Hundreds of Malaysians are believed to have died during the May 13, 1969 clashes between the Malays and the Chinese. Although ostensibly triggered by the results of Election 1969, it was rooted in ethnic tensions between the two communities.