KUALA LUMPUR, Nov 10 — A national audit has found that usage of the virtual learning platform provided by the RM4.1 billion 1BestariNet e-learning project to schools was very low at between 0.01 per cent and 4.69 per cent. 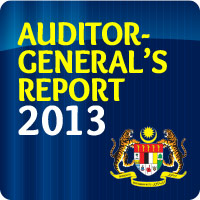 The Auditor-General’s 2013 Report (Series 3) released today also found that internet connection to 4,176 sites was delayed by up to slightly more than a year from the date of execution, with no extension of time or late penalty imposed.

More than half of 501 schools tested, or 58 per cent, said the 1BestariNet access did not cover the entire school area.

“Ministry of Education should issue a guideline for VLE (Virtual Learning Environment) in schools so that VLE could be optimised by teachers, students and parents,” said the report.

“The approaches relating to teaching and learning should be explained so that the schools could implement VLE effectively. Besides that, a pioneer project should be implemented to ensure the effectiveness of the outcome from this initiative,” the report added.

The audit also found that the 1BestariNet project, which was awarded to YTL Communications, did not provide satisfactory bandwidth connectivity to 89.1 per cent of 46 schools tested.

According to the report, the rental price of RM1,000 per year for each site of the 1BestariNet Receiver Integrated System (1BRIS) throughout the country was unreasonable.

“MOE should charge rental according to the rental rate that had been proposed by the Valuation and Property Services Department (JPPH) and utility to the contractor for 1BestariNet Receiver Integrated System (1BRIS) that is built in the school compounds,” said the report.

The audit added that the antivirus software supplied was not used either.

The 1BestariNet project aims to provide high-speed 4G internet access and a virtual learning platform to 10,000 schools within two and a half years from December 13, 2011, to June 12, 2014.

According to the report, the Education Ministry’s procurement board, through an open tender evaluation, had decided that the 1BestariNet project should be implemented within 15 years at RM4.077 billion.