N. Surendran, who took over from Anwar’s lead counsel Datuk Seri Gopal Sri Ram, told the Federal Court that the evidence of a “pre-arranged plan” was plain to see when Anwar’s accuser Mohd Saiful Bukhari Azlan admitted to meeting Najib, senior police officials and Umno leaders on June 24, 2008, two days prior to filing his sodomy complaint and even going to hospital for a medical check-up.

The lawyer questioned the Court of Appeal’s refusal to weigh this evidence in its judgment this year that overturned the High Court’s acquittal of Anwar in 2012.

“No evaluation undertaken... regarding pre-arranged plan.

He added that the appellate court’s judgment did not even state whether Anwar’s claim of a political conspiracy should be rejected or otherwise, arguing that the series of events tipped the probabilities in the opposition leader’s favour.

“Was the version by the complainant of alleged sodomy incident probable or not?” Surendran asked.

He pointed out that the facts of the pre-arranged meeting between the accuser and Anwar’s political foes were consistent with the statement his client had made from the dock in his own defence.

Surendran stressed that even though the statement was made unsworn and from the dock, it remained a form of evidence that the court should have considered, “but the Court of Appeal completely disregarded Anwar’s evidence.” 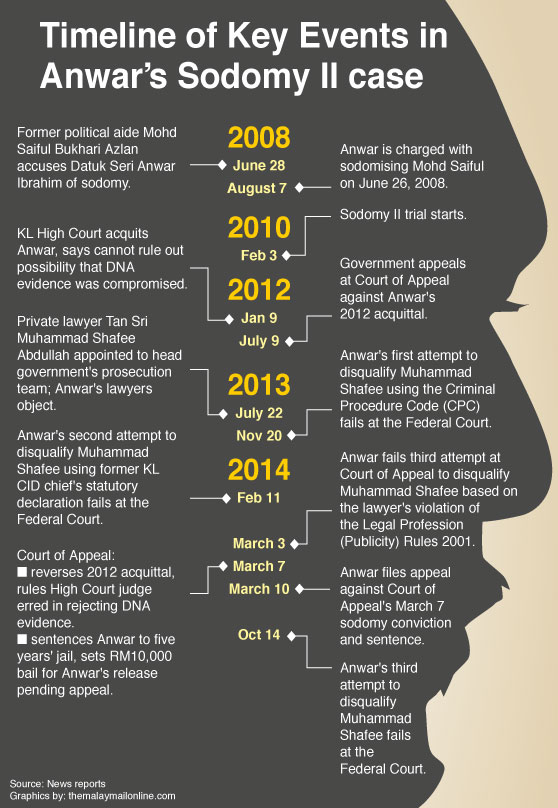 However, Surendran’s argument on this point did not seem to quite convince the Bench with one of the Federal Court judges asking the lawyer to cite a legal case where an unsworn statement from the dock could be used as evidence.

“Where is your authority that statement of dock has to be evaluated as evidence?” the judge asked.

Anwar, who is the Permatang Pauh MP, was charged with sodomy for the second time after Saiful, his former aide, complained of being sodomised by the politician at the Desa Damansara condominium in upscale Bukit Damansara on June 26, 2008.

The 67-year-old Penang-born politician has repeatedly maintained his innocence, insisting that the charges were trumped up to kill his political career as he allegedly poses a threat to the BN coalition’s decades-long rule with the Pakatan Rakyat alliance, which he now leads.

If Anwar fails to reverse his five-year imprisonment sentence and conviction in the Federal Court tomorrow, he would lose his seat as the law bars anyone fined RM2,000 or imprisoned for one year from serving as a lawmaker.

The Federal Court heard today Anwar’s challenge of the Court of Appeal’s decision to overturn a lower court’s decision to acquit him of the charge.