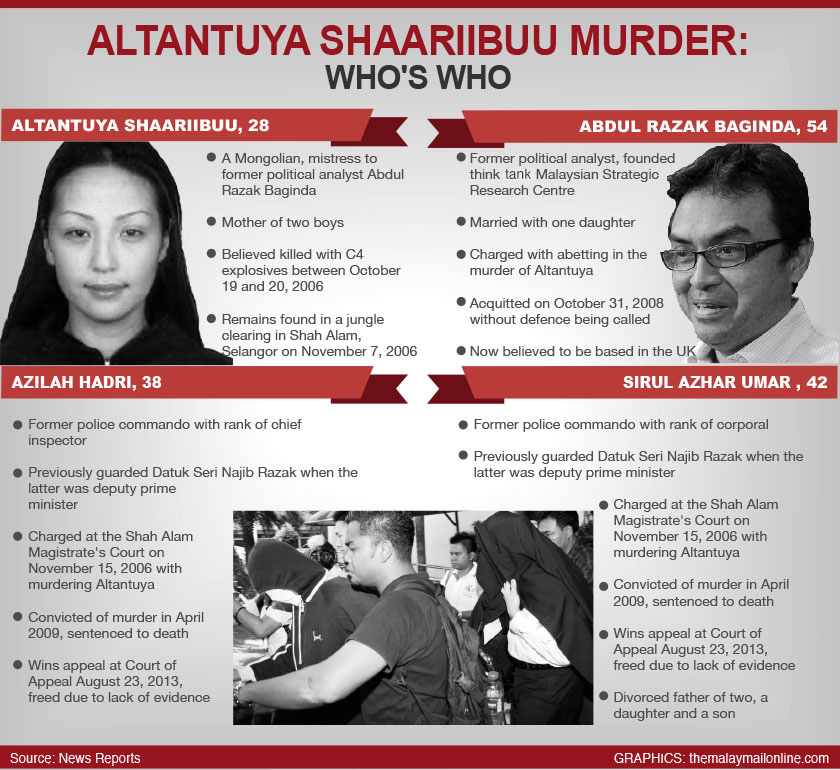 PUTRAJAYA, June 24 — Evidential photographs of a former police commando pointing at Mongolian Altantuya Shaariibuu's jewellery found in his jacket after her death were “orchestrated”, the Federal Court was told today.

Former police commandos Chief Inspector Azilah Hadri, 37, and Corporal Sirul Azhar Umar, 42, are facing a three-day appeal over their acquittal that will decide if they remain free or return to facing the gallows for Altantuya's 2006 murder.

Sirul's lead counsel Kamarul Hisham Kamaruddin described the claims that the photos were taken “simultaneously” as his client was pointing at the jacket as a “fantastic story”.

“That must be a remarkable example of police intuition,” he said in his attempt to cast doubt on the prosecution's claim.

Kamarul was disputing accounts by police officers that Sirul had voluntarily led them to the jacket and was allegedly never asked to pose with the jewellery.

He also pointed out the inconsistencies in the testimonies of different witnesses for the prosecution over the discovery of the jewellery - composing of a watch, a pair of earrings and a ring worn by Altantuya before her death.

In the visit to Sirul's house, the investigators had used a new set of keys that Sirul alleged did not belong to him, Kamarul said.

He added that the prosecution did not say where they had obtained the new set of house keys.

Based on the varying accounts from prosecution witnesses, Kamarul said Sirul was only brought into the room where the jacket was placed after investigators had searched the place and declared that items were found.

Pointing to the High Court judge's remark that Sirul had showed that the investigation was carried out in a “shoddy and slipshod” manner, Kamarul said the credibility of the prosecution's witnesses were in doubt and their testimonies are allegedly “unsafe” evidence.

Based on the prosecution witnesses' contradictory accounts, Kamarul questioned if Sirul's alleged statements during the jewellery find were actually made.

Yesterday, the appeal's lead prosecutor Datuk Tun Abdul Majid Tun Hamzah argued that the jewellery found in Sirul’s jacket at his home should have been considered by the Court of Appeal despite some “contradictions” in its discovery, adding that DNA belonging to Altantuya was found inside the jacket.

The three-day appeal hearing before Chief Justice of Malaysia Tun Arifin Zakaria is set to run until tomorrow.

Last August 23, the Court of Appeal acquitted Azilah and Sirul, ruling that the High Court trial judge’s misdirection had rendered the 2009 death sentence and conviction unsafe.

Azilah and Sirul, both formerly with the police’s Special Action Unit (UTK), were found guilty in 2009 of murdering Altantuya in Mukim Bukit Raja in Klang between 10pm on October 19, 2006 and 1am on October 20, 2006.

During the course of their trial, it was revealed that the Mongolian model was shot and her body blown up with explosives in a jungle clearing on the night of October 19.

Former political analyst Abdul Razak Baginda was charged with abetting Azilah and Sirul in the murder but was acquitted on October 31, 2008, after the Shah Alam High Court ruled that the prosecution had failed to establish a prima facie case against him.

The prosecution did not appeal against the 2008 acquittal of Abdul Razak.