GEORGE TOWN, April 17 — Today, the nation woke up to the shocking news of the death of Karpal Singh.

This man who has been part of Malaysia’s political landscape for so long and who has overcome all sorts of struggles — both public and personal — died in a road accident early this morning.

Malaysians, both here and abroad, are still coming to grips that the Tiger of Jelutong is no more. After all, he has always been a fierce warrior… surely he cannot have been felled.

But the Bukit Gelugor MP was killed in a road accident at KM306.1 of the North-South Expressway near Gua Tempurung at about 1.10am today.

He was believed to be travelling from Kuala Lumpur to Penang for a court hearing this morning.

Karpal, who was seated in the front passenger seat, was killed on the spot together with his long-time assistant, Michael Cornelius. 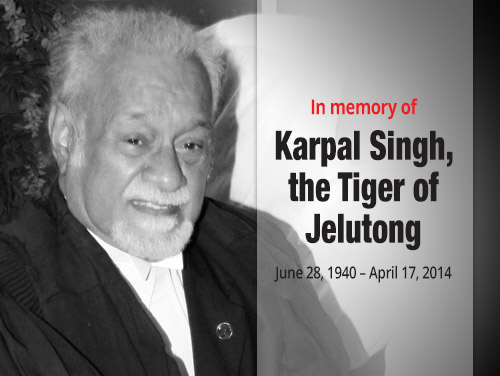 This giant of a political leader earned the moniker “Tiger of Jelutong” when he won the Jelutong parliamentary seat in 1978 and held it for 21 years before losing it in the 1999 general elections.

He made a comeback as an MP when he won the Bukit Gelugor parliamentary seat in 2004 and led the DAP to its landslide win in Penang in the 2008 general election.

The DAP national chairman first started his political career in the Opposition party back in 1970 in which he won the first Kedah state seat for the party in 1974.

Born in Penang on June 28, 1940, the law graduate from National University of Singapore was called to the bar in 1969 and started his law firm in 1970.

A staunch opponent of the death penalty for drug cases in Malaysia, Karpal was also well known for the many court cases he fought and won in court, notably drug trafficking cases.

The lawyer, who was widely regarded as the best criminal and constitutional lawyer in the country, had also represented PKR de-facto leader Datuk Seri Anwar Ibrahim in the 1998 sodomy trial.

The 73-year-old, who would turn 74 in June, was a controversial figure who spoke up during debates at the state legislative assembly and parliament and was known to openly criticise Barisan Nasional parliamentarians and even the royalty.

On February 21, he was found guilty of sedition for questioning the Perak ruler on his decision to remove former Perak menteri besar Mohammad Nizar Jamaluddin from his post in February 2009.

The Kuala Lumpur High Court fined Karpal RM4,000 on March 11, which prompted the lawyer to step aside as DAP national chairman just two weeks ago.

Karpal was wheelchair-bound due to injuries sustained after a car accident near his house in Jalan Utama here back in 2005.

He left behind his wife, Gurmit, five children and four grandchildren.