GEORGE TOWN, Jan 17 — What do an old broken cabinet, a wooden board, a battered ping pong bat, a pair of paint-splattered trousers, stacks of wooden drawers and an engine have in common?

These are the “rubbish” that famous street artist Ernest Zacharevic has turned into art installations at his solo art exhibition, aptly named “Art is rubbish/rubbish is art.”

Looking at the works on display, it is clear the young Lithuanian artist has managed to prove the point that there is beauty everywhere.

“I just want to emphasise the point that one man’s rubbish can be another man’s treasure which is why I chose this theme,” the soft-spoken artist said during a sneak preview of the exhibition yesterday. 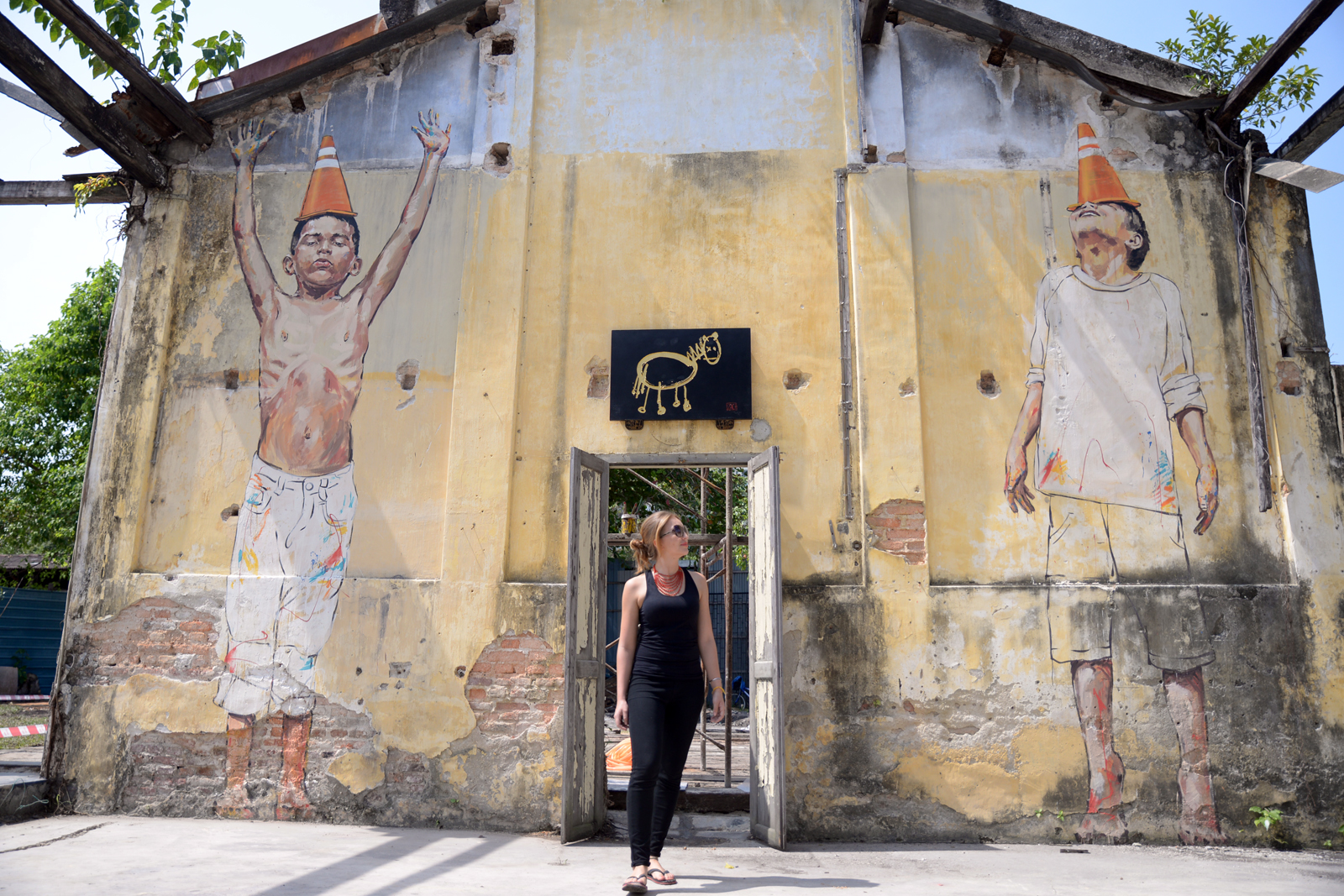 Two boys flanked a single doorway on a section of a wall connected to another wall by wooden beams. — Picture by KE Ooi 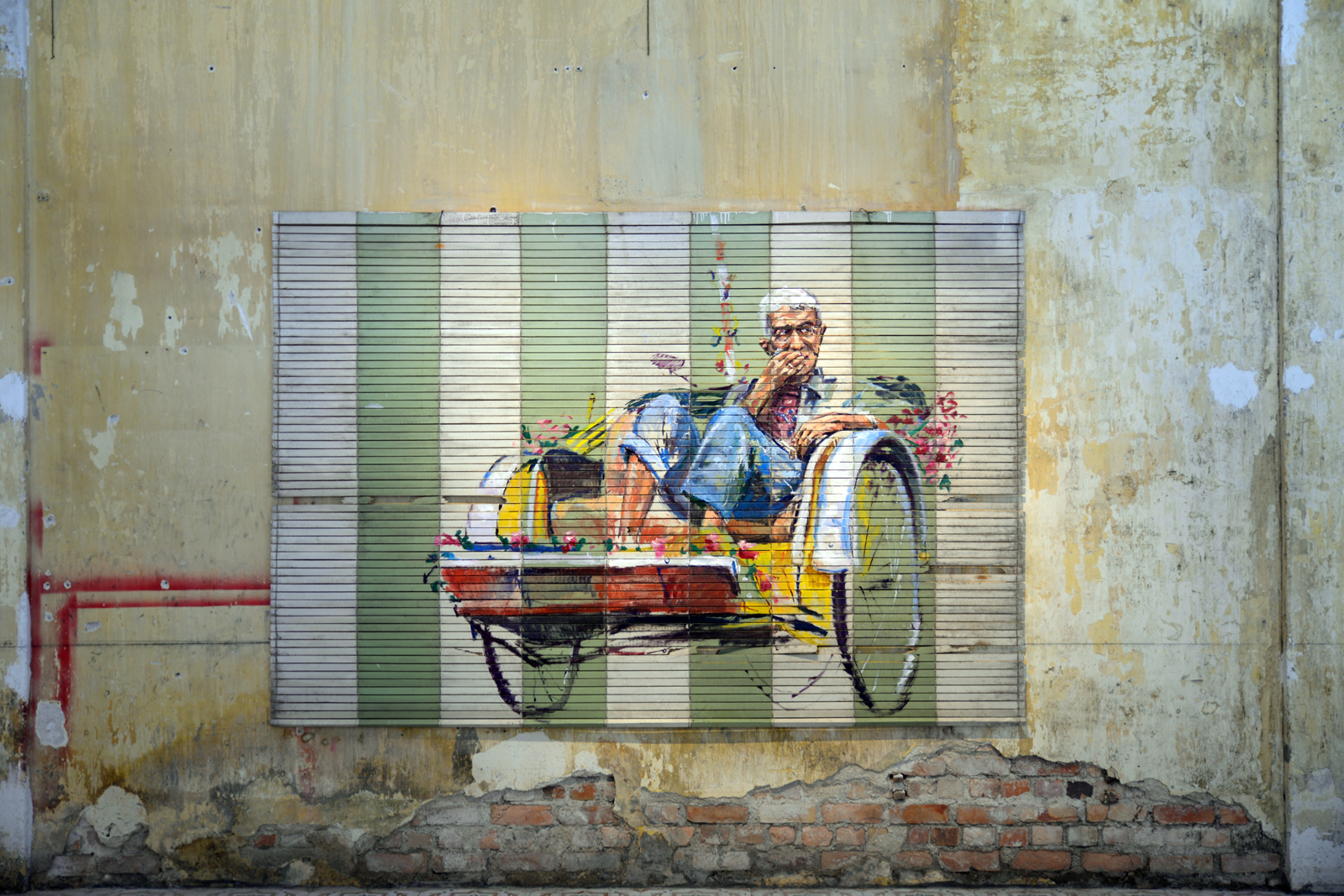 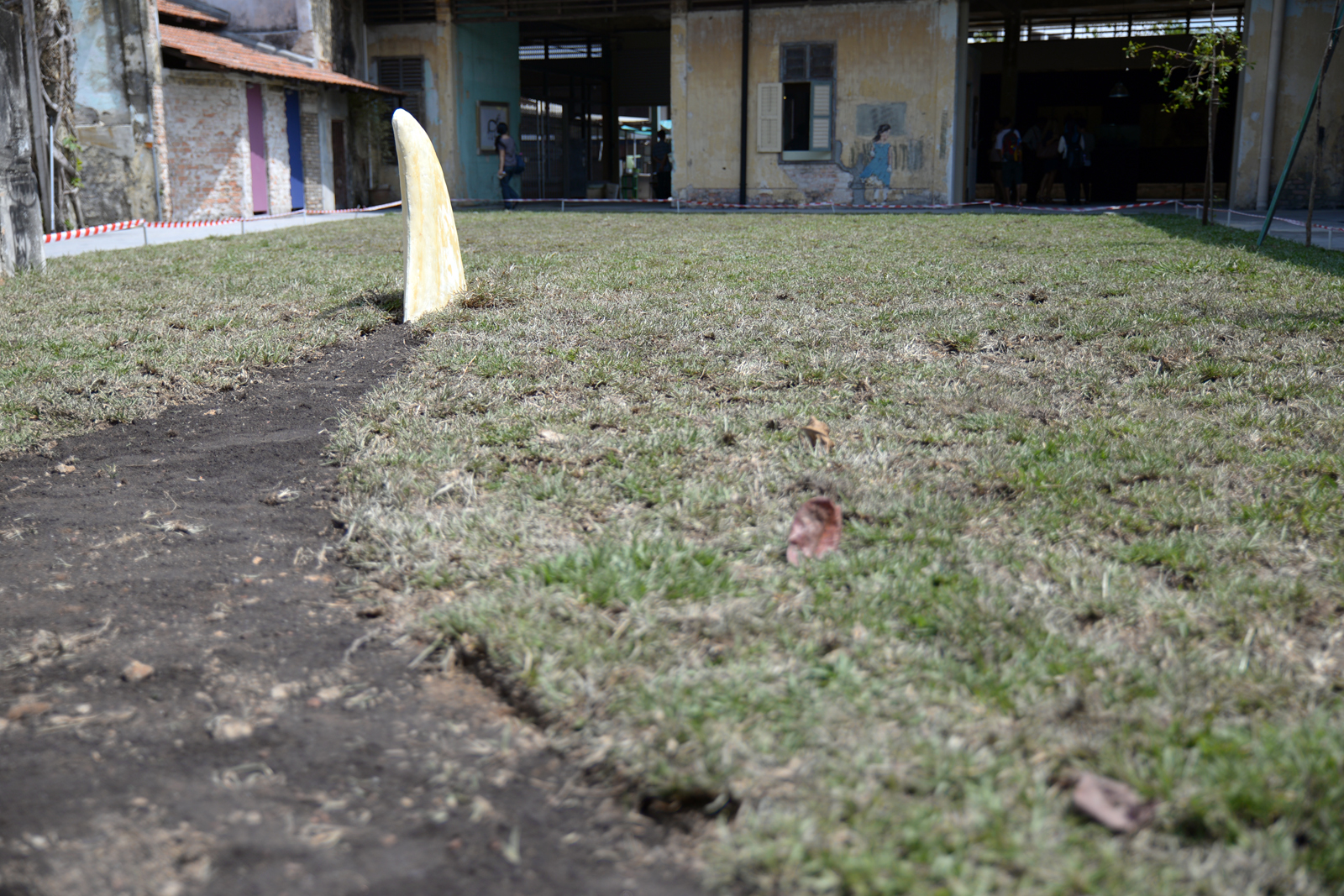 Shark in the garden used to be part of a kavadi creatively reused as an art piece. — Picture by KE Ooi 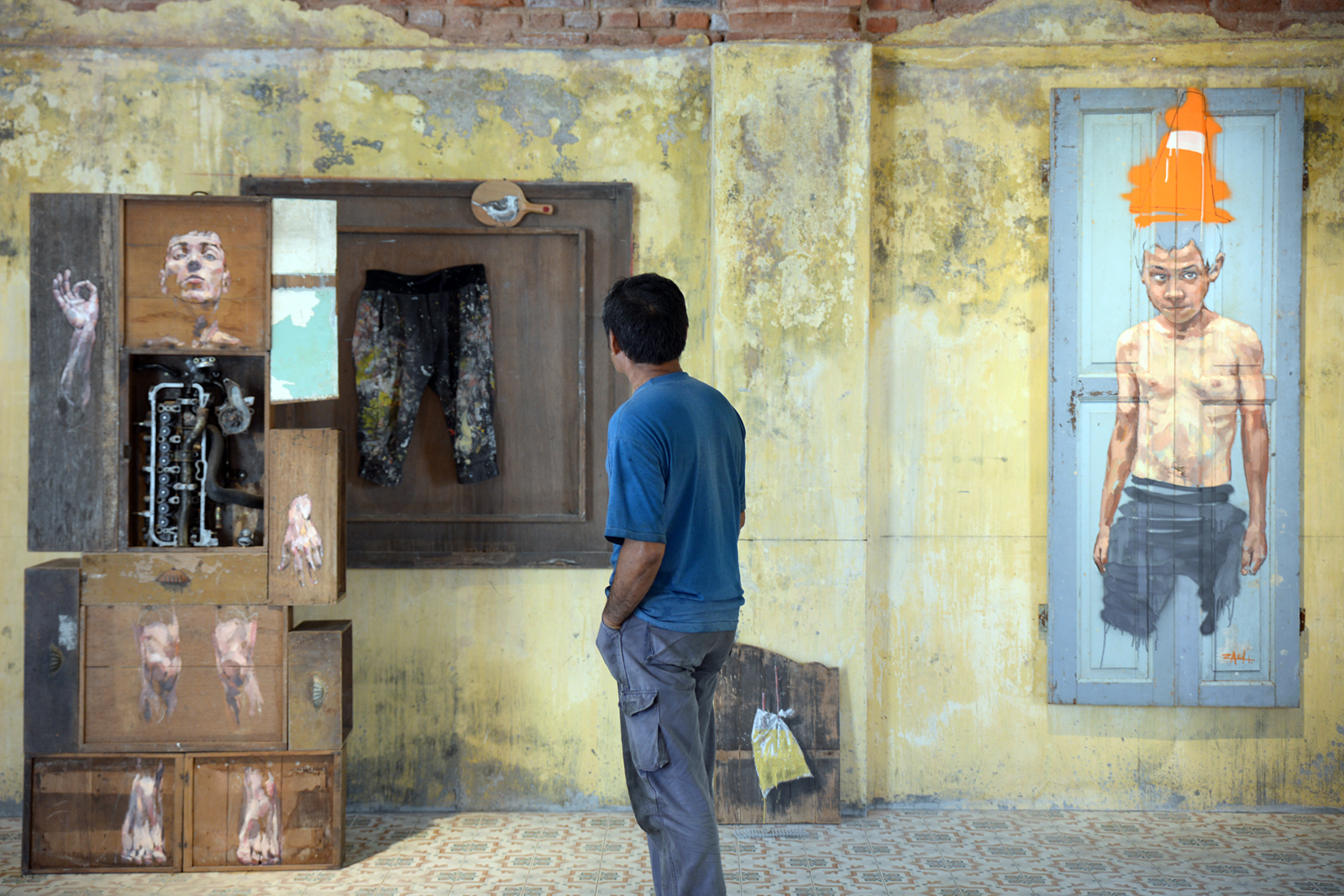 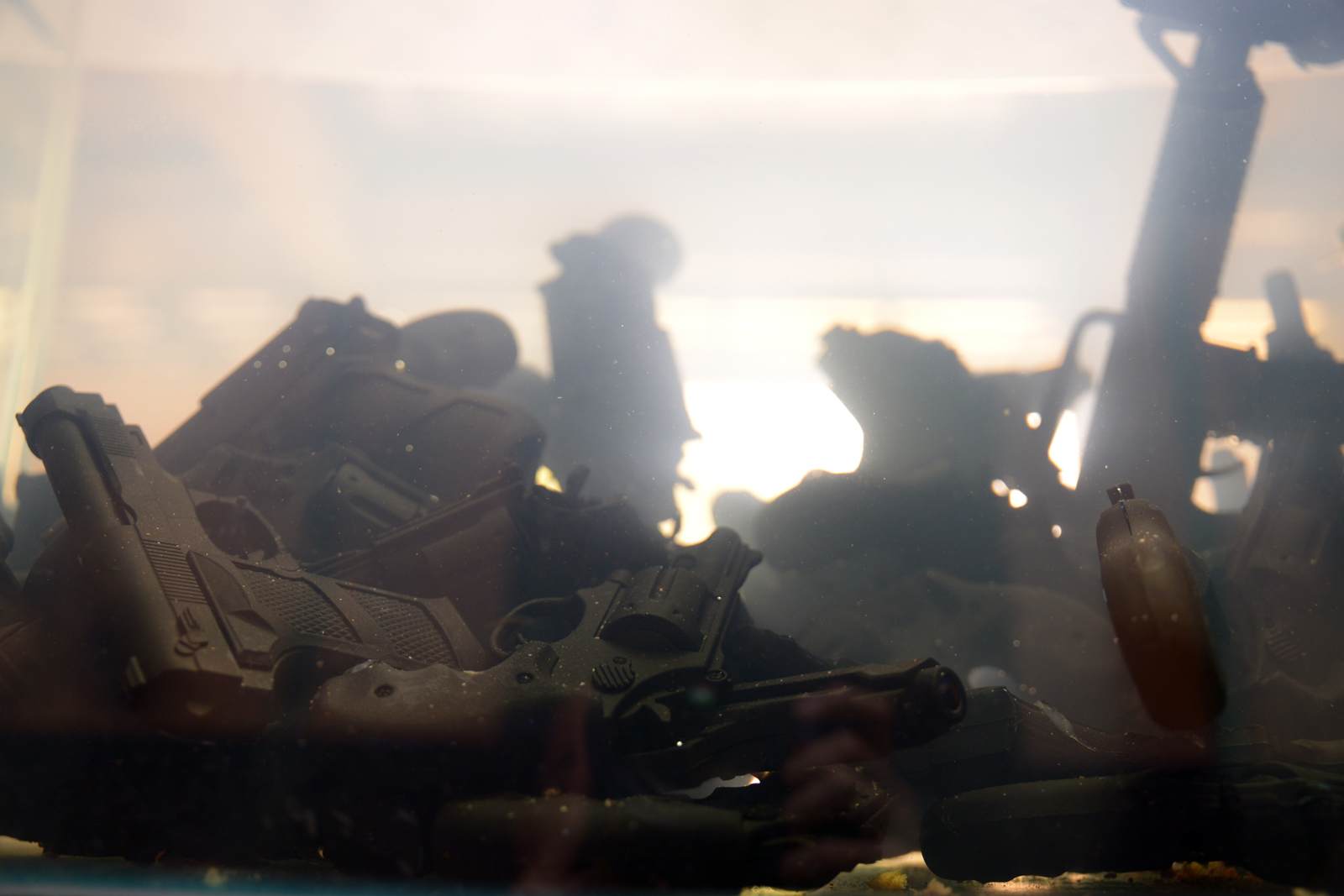 Corals or guns_ An aquarium full of toy guns with real fishes swimming around it. — Picture by KE Ooi 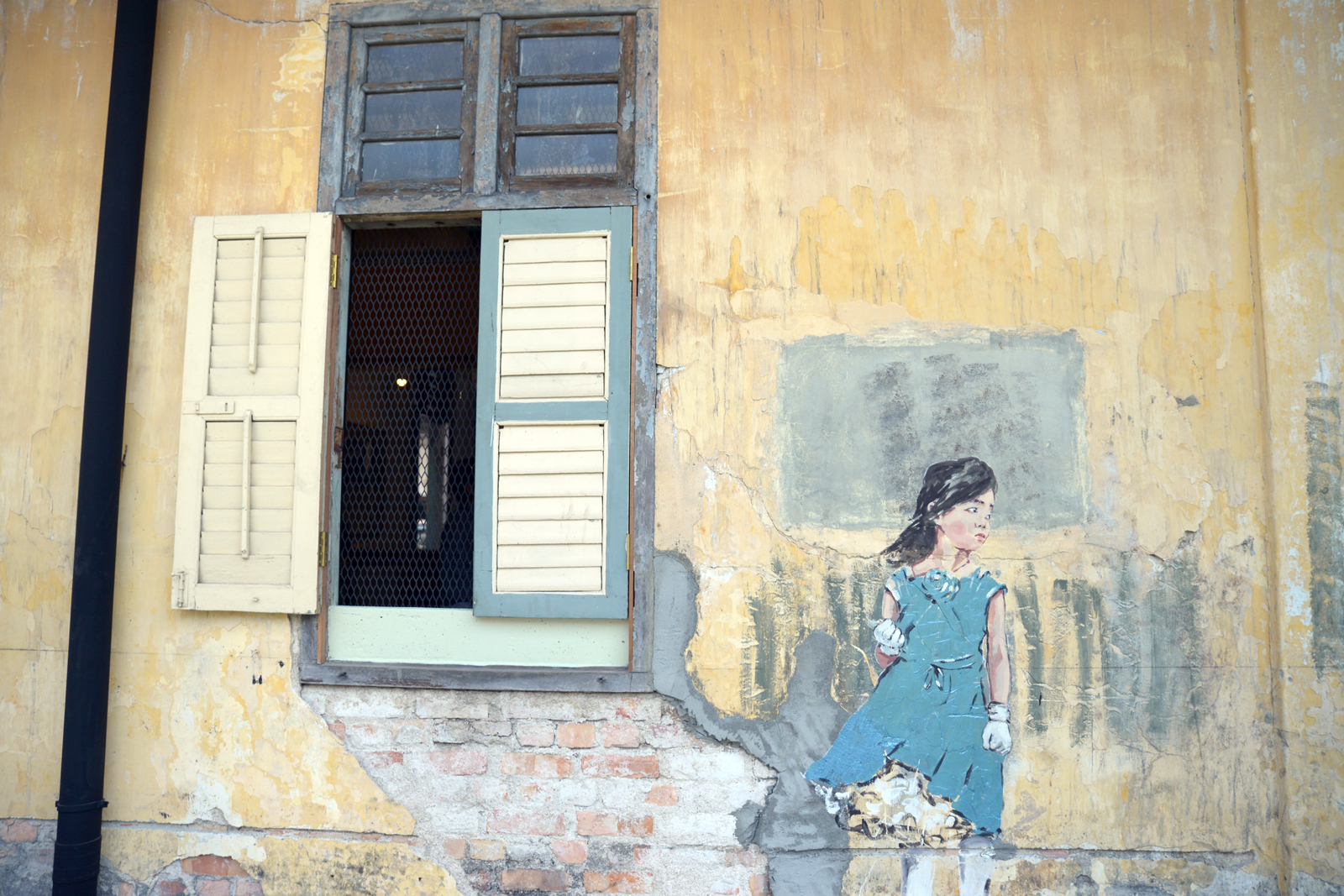 Girl in blue by the window. — Picture by KE Ooi 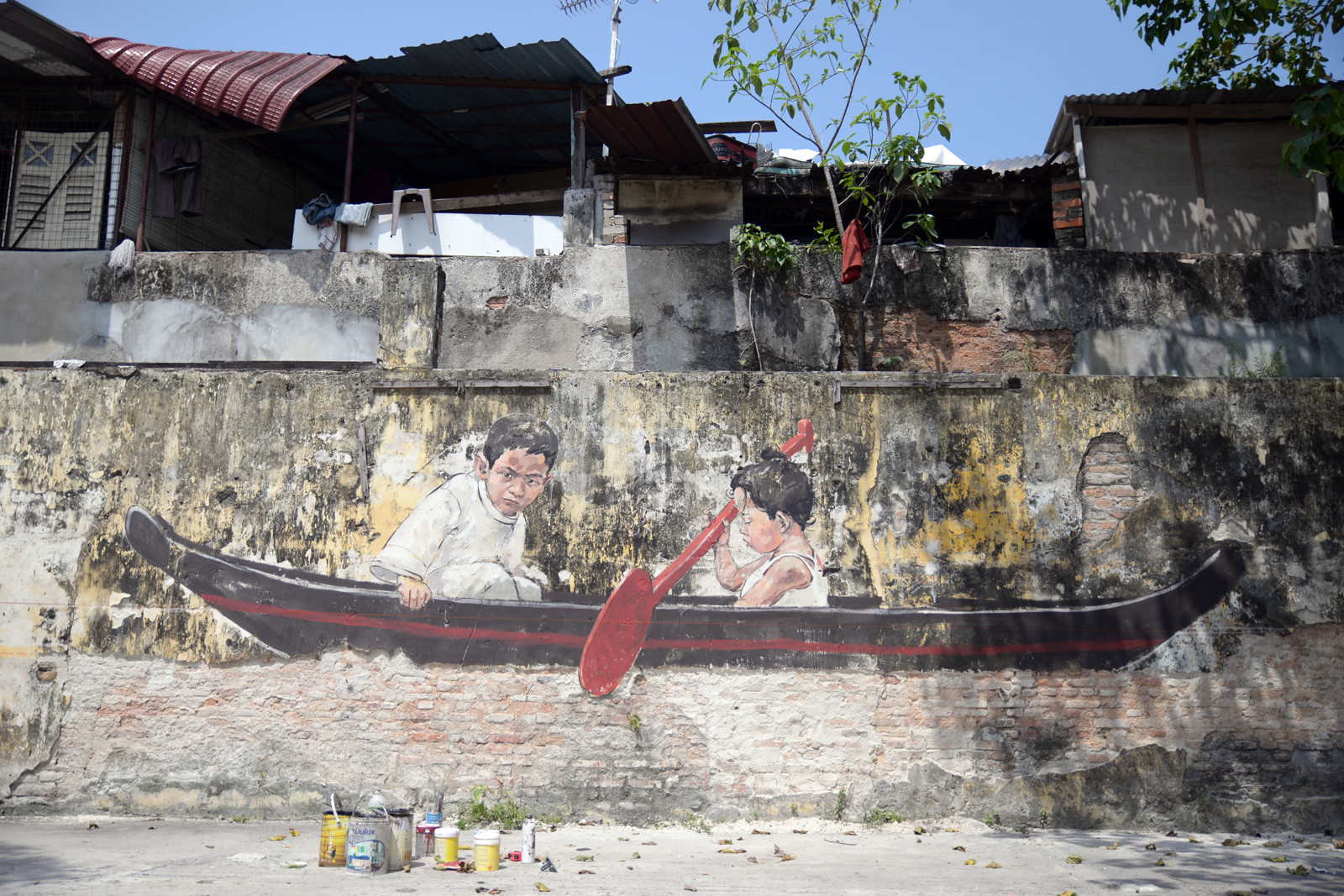 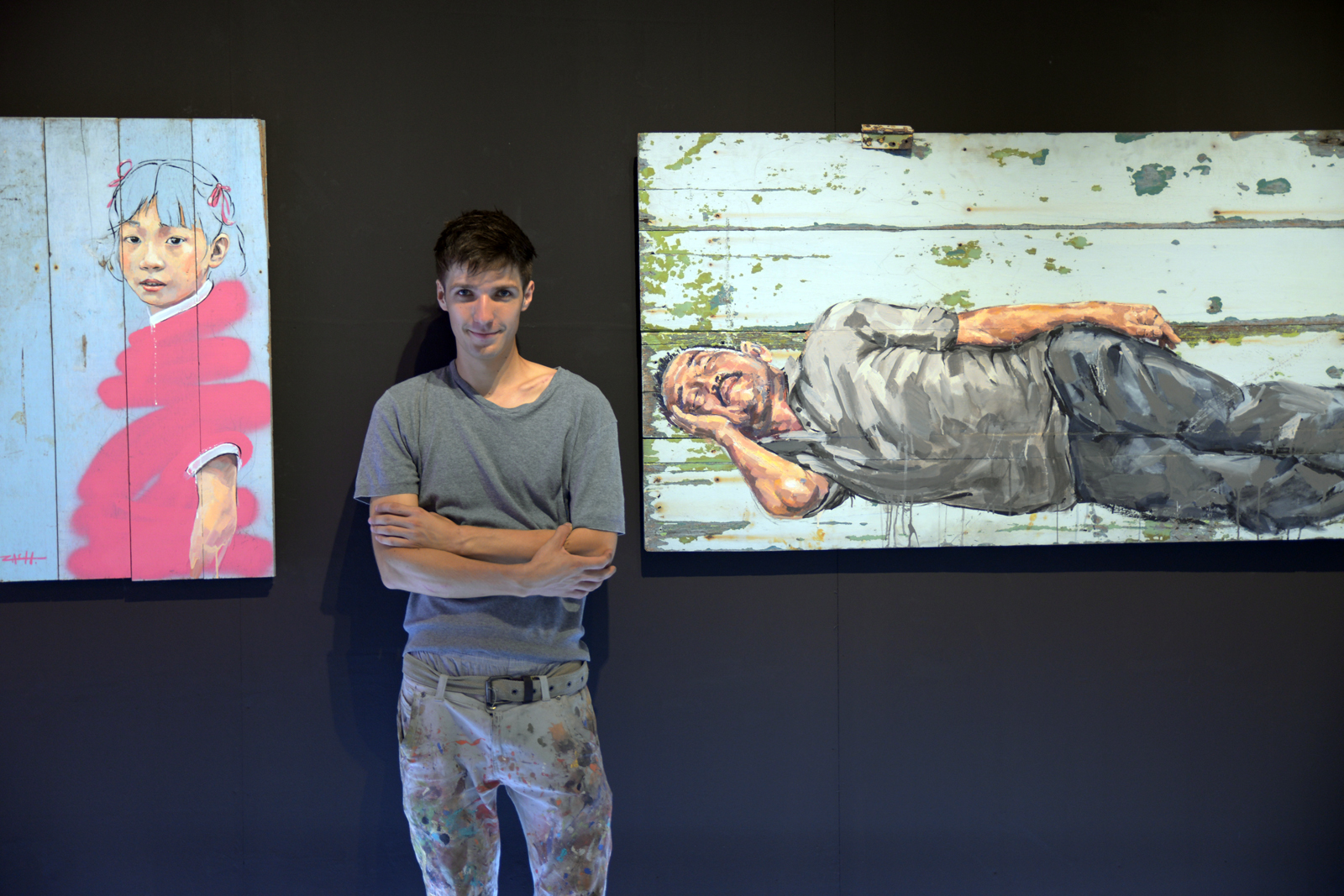 It opens for public viewing tonight.

Zacharevic used different materials including pieces of wood, old blinds, thumb tacks and even a discarded old kavadi to make the 23 works on show.

The location of the exhibition — the old Hin Bus Depot — is also perfect for the theme as this old 1940s Art Deco building has been left in a state of disrepair for many years.

The peeling paint, with glimpses of red bricks underneath, and crumbling walls make the perfect canvas for Zacharevic's wall murals.

Within the depot, you will find lively, colourful and thought-provoking wall murals on different sections of walls all around the 20,000 sq ft compound.

His lifelike and sometimes wistful — often cheeky — depictions of mostly local children on the walls are in the same style of his wildly famous wall murals found all over George Town. Those were painted in conjunction with George Town Festival 2012.

On a wall, near to a shuttered window, a small girl in blue appears to be waiting or looking for something on the right, reminding those who are familiar with his works in George Town of the mural of the girl in blue along Muntri Street.

On another wall standing on its own except for wooden beams connecting it to another wall, two boys flank a single doorway while a black coloured board with a gold horse sketch is above the doorway reminiscent of the old Chinese-style signboards traditionally used by Chinese businesses.

Inside an exhibition hall, gunny sacks have been turned into canvases with packets of drinks painted onto wooden window shutters, bunches of old toy weapons turned into corals in an aquarium of fishes and oil drums turned into actual tables with paint buckets as chairs.

There is also a supermarket trolley painted over with bulging black garbage bags within it in the seating area outside the exhibition hall.

Zacharevic sourced all of his materials here locally and used Murabond Paints for all his works in the exhibition. He believes the paint is good to use on heritage buildings.

“George Town has inspired me so much, the people, the beauty, this is why I chose to have my first solo exhibition here,” he said when asked why he came back to Penang for the exhibition when he could have held it anywhere else in the world.

Fans who are disappointed over the whitewashing of his controversial Lego robber man mural in Johor are in for a treat as he has created an almost human size Lego robber man and Lego woman with handbag as part of this solo exhibition.

The one-month exhibition, which is free, is open daily from noon till 8pm and will end by February 14.

The best time to visit the show is in the evenings, according to Zacharevic’s publicist Gabija Grusaite, as special lighting has been put up all around the depot to create a mystical atmosphere while making the art works stand out in stark relief against the backdrop of faded walls.

Zacharevic said the movable exhibits such as the paintings on gunny sacks or paintings on window shutters will be relocated and placed as part of a permanent exhibition at the E & O Hotel Victory Annexe gallery after the show is over.

Almost simultaneously, Zacharevic is also collaborating with E & O Hotel to showcase a satellite show featuring oil paintings of Penang, sketches and offset prints documenting his fascination with the island.

The exhibition, located at the E & O Hotel Victory Annexe will open on January 20 and end sometime in mid-April.

Immediately after the solo exhibition, some of the installations will also be moved to adorn the boardwalk of Straits Quay marina, as part of his collaboration with Eastern and Oriental Berhad which owns both the E&O Hotel and the marina retail shopping mall in Tanjung Tokong.