PISA: Malaysia up in maths, down in science and reading 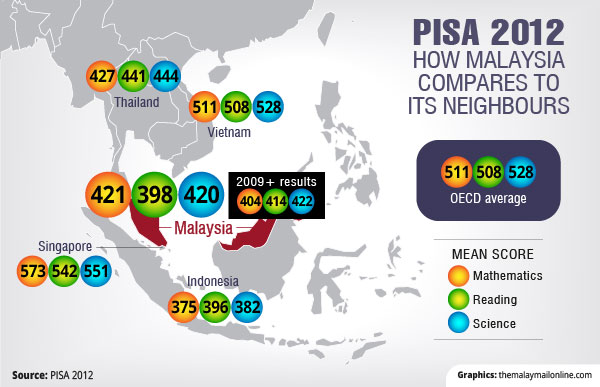 In the 2012 edition of the global education benchmark, Malaysian students recorded an average score of 421 for mathematics, which was below the 494 mean for countries within the Organisation for Economic Co-operation and Development (OECD) but above the 404 the country registered in the 2009+ edition.

Reading ability fell the most, plunging to an average of 398 in the 2012. Malaysian students in the previous edition had recorded a score of 414, while the current OECD average was 496.

Science scores saw a minor decline versus the older findings, with Malaysians weighing at an average of 420 marks against the 422 that the batch three years ago managed. Students in the 34 OECD countries received an average of 501.

Malaysia was now ranked 55th for science, down two spots from the previous assessment.

Neighbours Singapore were placed second in the assessment, behind top-scorers from Shanghai in China. Thailand is two places above Malaysia while Indonesia was second from bottom.

This is the second time Malaysia has been included in the survey that first began tracking students worldwide on the three subjects in 2000. The country was listed in the 2009+ edition, which was an expanded version of the 2009 results that tested new entrants in 2010.

The latest results is set to trigger another round of finger-pointing over the state of Malaysia’s education, which is due for a major overhaul under the Malaysian Education Blueprint 2013-2025 that was launched last month.

Among the stated aims of the education master plan was to put Malaysia in the upper third of the PISA benchmark as well as the Trends in International Mathematics and Science Study (TIMSS), another widely-used global yardstick.

Critics have accused the government of allowing political interests to creep into decisions on education policy, most notably the decision to abandon of the Policy of Teaching Science and Mathematics in English (PPSMI) in 2010 that is alleged to have been a nod to Malay nationalists.

Parents and education lobbyists, including the outspoken Parents Action Group for Education (PAGE), say the inconsistencies in education and a refusal to put greater emphasis on English was to blame for the  country’s prolonged drop in standards.