This postman knows that with great power comes great responsibility. — Picture courtesy of Pos Malaysia Berhad
Follow us on Instagram, subscribe to our Telegram channel and browser alerts for the latest news you need to know.
By By Melanie Chalil

PETALING JAYA, April 25 — With “Avengers: Endgame” fever sweeping fans across the globe and not even Pos Malaysia is spared from the excitement.

The national courier took to Facebook yesterday with a funny photo of a postman clad in the iconic red and blue Spiderman suit while riding a motorcycle. 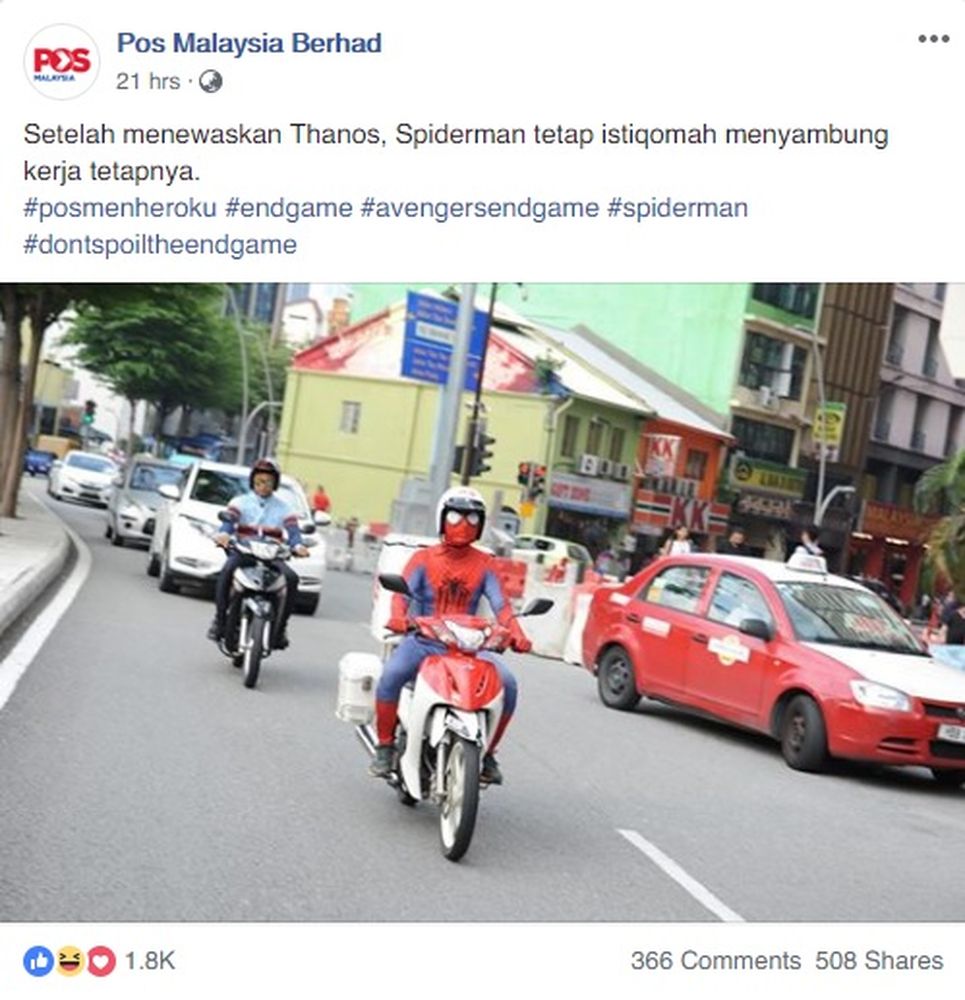 The funny post was part of Pos Malaysia’s content marketing in conjunction with the Marvel Studios superhero movie. — Screengrab from Facebook/Pos Malaysia Berhad

“After defeating Thanos, Spiderman is still persistent (istiqomah) in continuing his full-time job,” the caption read, accompanied by the hashtags #posmenheroku and #dontspoiltheendgame.

Pos Malaysia Berhad told Malay Mail that the post was part of its content marketing in conjunction with the anticipated Marvel Studios superhero film.

“We wanted to highlight our very own hero and encourage the public to show their appreciation to the postmen. That’s why we captioned the FB posting with the hashtag #posmenheroku,” a Pos Malaysia spokesperson told Malay Mail today when contacted. “The Spiderman costume symbolises our postman as one of the actual heroes in reality. The postmen are the core of Pos Malaysia due to their importance in the postal and courier industries.”

It is understood the now-famous Spiderman is an employee of the national courier company.

The representative added that they would like Pos Malaysia users to appreciate and value the unsung heroes through the light-hearted post.

Pos Malaysia also revealed it will be collaborating with Disney Malaysia to bring customers Marvel and Avengers-themed products as part of a joint promotion.

The post which has since garnered 1,800 likes and 501 shares, has been receiving hundreds of comments ranging from comedic responses to users who enquired on the whereabouts of their parcels, which Pos Malaysia responded to.

The creative content marketing exercise, which was the brainchild of the communications department, also proved to be a fun day at the office.

“Everybody had a good time during the photoshoot. We are also delightfully surprised with the reception and comments shown by the public on our social media platforms which mostly are very amusing yet very appreciative of our postmen.”

The photography session took place yesterday from 4pm to 6pm near the Central Market area which caught the public’s attention and Peter Parker fans in the city as their Spidey postman had to make a few rounds at the location’s busy streets.

“Some passersby could be seen whipping out their smartphones and cameras to capture the rare instance of a postman in the Spiderman’s costume on a Pos Malaysia’s motorcycle,” the Pos Malaysia spokesperson said.

“Some motorists even asked for selfies and interacted with the ‘Spidey’ while he was at the traffic light.”