How does one turn banana bread into a nut butter? BREAKFIRST by Amy has the delicious answer KUALA LUMPUR, June 21 — Artisanal nut butters are a dime a dozen these days so what does a homegrown brand have to do to stand out from the pack?

Sometimes this requires spreading the joy to construct a loaded toast one can truly be proud of, such as one with a rainbow of nut butter stripes.

I certainly wavered when faced with BREAKFIRST by Amy’s astonishing variety of nut butter flavours, ranging from the classic to the more curious sounding. (Masala Chai Almond Butter or Pumpkin Seed Butter with Cinnamon, anyone?)

BREAKFIRST by Amy’s founder, Amelia Lee, believes in starting the day with a nutritious breakfast — hence the name, an amalgamation of "breakfast” and "first” — and sees her nut butters as a convenient means to that end.

Whether it’s some Maple Pecan Pie Butter to go with your morning oatmeal or dousing some homemade matcha crêpes with a silky-smooth sauce made with her Smooth Peanut Butter, Lee believes there’s a nut butter for every palate. Lee started the brand — founded in 2018 — with the mission of "making healthy eating more affordable.”

The 30-year-old AFPA (American Fitness Professionals & Associates) qualified Holistic Nutritionist had previously worked in the digital/social media industry with some experience in the health & wellness startup scene before becoming a small business owner.

The business initially started off with baked goods such as whole wheat banana bread, gluten-free brownies and birthday cakes, and even vegan peanut butter bars. BREAKFIRST by Amy’s founder Amelia Lee believes in a nutritious breakfast such as these matcha crêpes with peanut butter sauce.

Nut butters were only introduced a year later. Along the way, the increased demand for these plus supply chain concerns during the pandemic caused Lee to refocus solely on nut butters.

She shares, "It is also important during product development for me to think from a nutritional standpoint. Every ingredient used was chosen carefully with the best intention, while making sure that there are no added oils, preservatives or emulsifiers. All nut butters are also vegan — and gluten-free to be more inclusive.”

These careful tweaks include lightly roasting nuts upon order to ensure the small batch nut butters are more fragrant and stay fresher for longer, designing recyclable/reusable gift boxes and developing new recipes or ways to use the nut butters such as nut butter stuffed dates.

Operations were very much a hands-on affair when Lee first started. She recalls, "The website was hosted on a free plan on WordPress, and there was no payment gateway. The only way I would receive orders was through Google Forms and WhatsApp, where customers would make their payments through bank transfer.” As everything was made in micro batches from Lee’s home kitchen, orders soon piled up due to limited capacity in the early days.

She says, "The equipment broke down constantly because I was only using home-grade appliances then. I was able to gradually upgrade my equipment when I allowed the revenue to roll over the course of time, as I didn’t draw a salary for the first year and half in business.”

Eventually the tide turned as customers began requesting unique flavours. She says, "That was when I came up with limited batch flavours during the festive season such as Tangerine Ginger Almond Butter, Maple Pecan Pie and Osmanthus Oolong Cashew Butter.

"It’s a win-win when customers are keen to try new flavours and it allows me to channel my creativity through product development!”

Over the years, Lee has participated in weekend bazaars and collaborated with local brands such as Dou Dou Bake. Partnering with stockists such as Jln Theatre Coffee in Ipoh and others around the Klang Valley, Melaka and Johor Bahru also helped BREAKFIRST by Amy gain more of an on-the-ground and in-store presence. 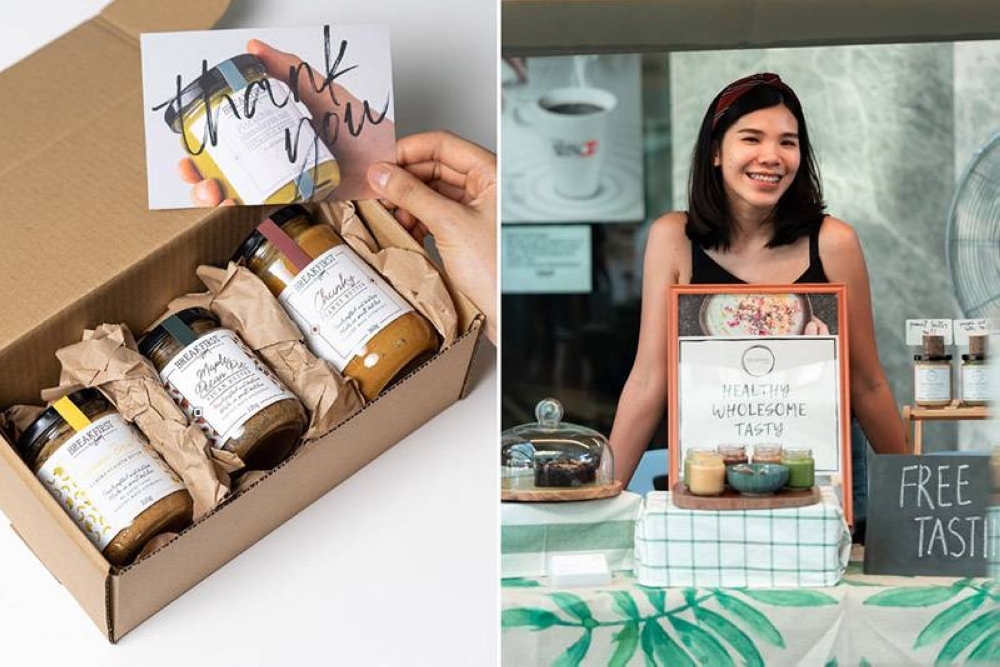 Gift box of nut butters (left). Lee at a weekend bazaar in 2019, before the pandemic (right).

She adds, "These B2B (business-to-business) partnerships definitely garnered the brand more attention and pickups. By the end of 2021, I finally moved into a commercial kitchen space to streamline production and operations while building a small team. Today, customers are able to purchase directly from our website or through the nearest stockists.”

Lee enrolled to become a Holistic Nutritionist in 2020, studying part-time while running the business.

By equipping herself with more knowledge in the field of nutrition, she reasoned she would be able to make informed decisions while developing products for customers.

She explains, "It’s important for me to be intentional about what I do, the ingredients I use and the products that I make available. I’ve learned that I have the ability and privilege to impact people’s food choices, and I take that responsibility on to make sure that what people consume don’t just taste great at the expense of their health, but are also nutritious.”

Of course, the reverse is true: nutritious food doesn’t have to come at the expense of taste. A generous spoonful of Chocolate Almond Butter for a very loaded toast.

Lee shares, "Sometimes we get requests for certain flavours especially during festive seasons such as Cinnamon Snickerdoodle or Black Sesame.

"Occasionally, we collaborate with other brands to come up with limited batch flavours — brainstorming flavour ideas and then the R&D before deciding on the winning flavour and eventually launching it online and in stores.”

The Banana Bread Almond + Cashew Butter, for instance, is a perennial bestseller for BREAKFIRST by Amy.

Made from almonds, cashews, freeze-dried bananas, cinnamon, Himalayan pink salt and nutmeg, the idea for this distinctive nut butter came when Lee thought of putting all the flavours of their OG Banana Bread loaf into a jar.

Ultimately, the goal is to deliver a product that makes sense to the customers. Lee says, "When it comes to developing flavours, it’s all about having fun while keeping flavours relevant and familiar enough for people to want to try them!”