Craving crêpes and coffee in Bangkok?

This is a conversation about crêpes and coffee in Bangkok.

The coffee part is easy to understand; we have been drinking coffee and café hopping all around the world for years, after all. We’d be sipping a nice pour-over whether we were in KL or Bangkok or Tokyo.

Crêpes, on the other hand, are a bit more of a mystery.

We have never been particularly fond of pancakes or waffles or other sweet treats destined for a brunch menu. (French toast, on the other hand, is a delectable exception to the rule. Pair it with some fruit compote and that’s a weekend brunch worth waiting for.) 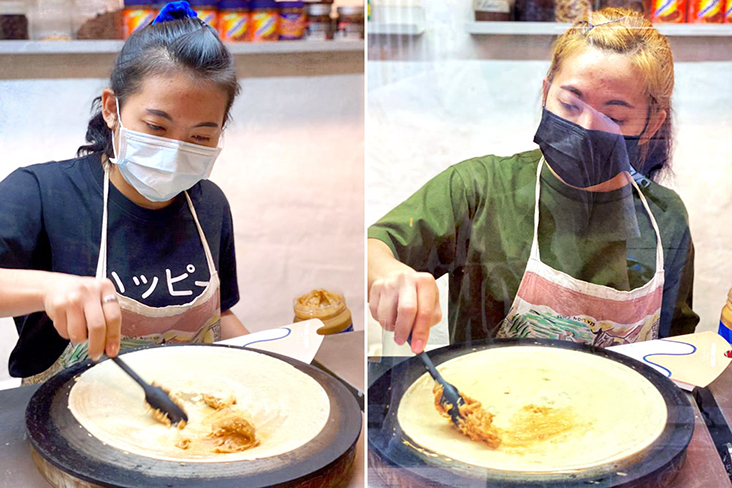 It’s a discovery, when we stumbled upon a crêperie – a shop that makes crêpes in the neighbourhood of Ari in north-central Bangkok. The aroma of batter on a hot griddle drew us in but it’s the toppings that won us over.

One of us is obsessed with peanut butter. I ought to know; I once made a molten peanut butter and chocolate fondant cake just to satisfy such cravings. (The only thing better than chocolate lava or salted egg yolk lava oozing out, we reckon.)

So these crêpes in Bangkok, this new fixation, make sense – even if it’s not the first time we have encountered them before. We have had them in Versailles, where the crêpier had a Breton’s love of butter – lots of it – and we have had them in Auckland, where more Kiwi flavours reigned, from Aoraki smoked salmon to honey from Arataki. 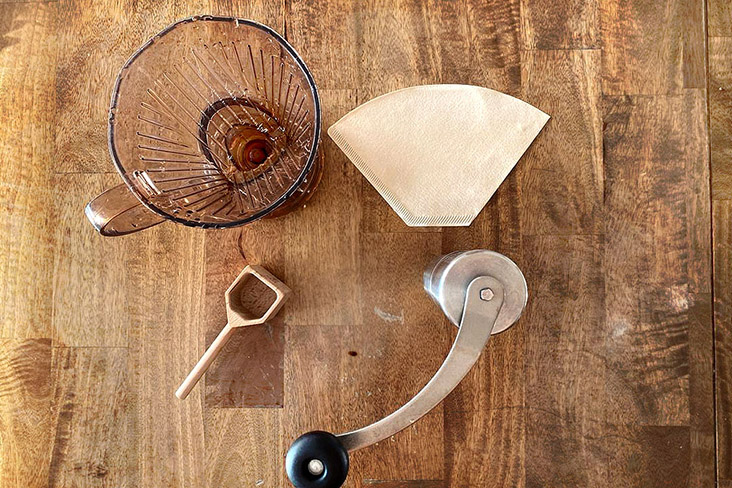 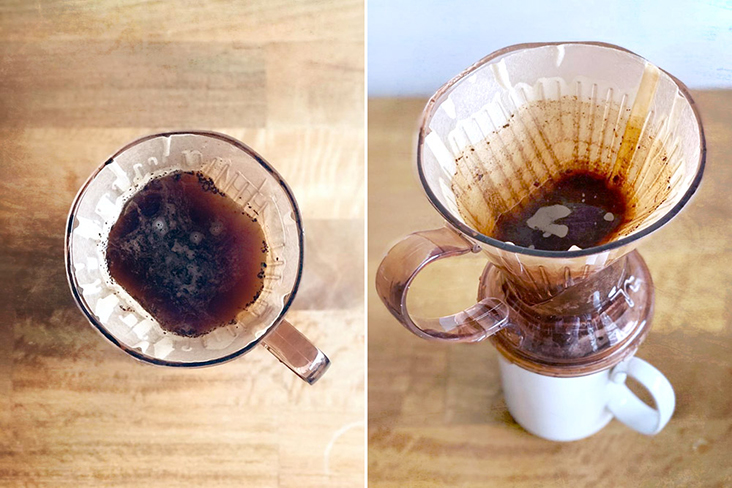 These crêpes we enjoy in Bangkok are like the ones in Tokyo, particularly the colourful crêpe trucks in Harujuku. We had a favourite truck, usually parked near the tendon shop.

During more gluttonous visits, we’d have a rice bowl topped with assorted tempura before making a beeline for the crêpe truck. A freshly made strawberry and cream crêpe counted as dessert, surely?

But the crêpe shops in Bangkok aren’t a mere facsimile of a Japanese treat (itself a delightful adaptation of the French original). Tastebuds are different here, perhaps more adventurous.

Rather than a filling of nama kurimu (fresh whipped cream) and rich custard, you may order a crêpe with Milo, condensed milk and cornflakes. No autumnal kuri (chestnuts) and kuromitsu (a traditional Japanese black sugar syrup) here; how about a savoury and spicy crêpe rolled with ham and chilli paste instead?

There’s one made with shredded coconut, pork floss and a far too generous scattering of brown sugar; that would be the one I’d most want to try... after having pre-emptively gone on a diet, of course. 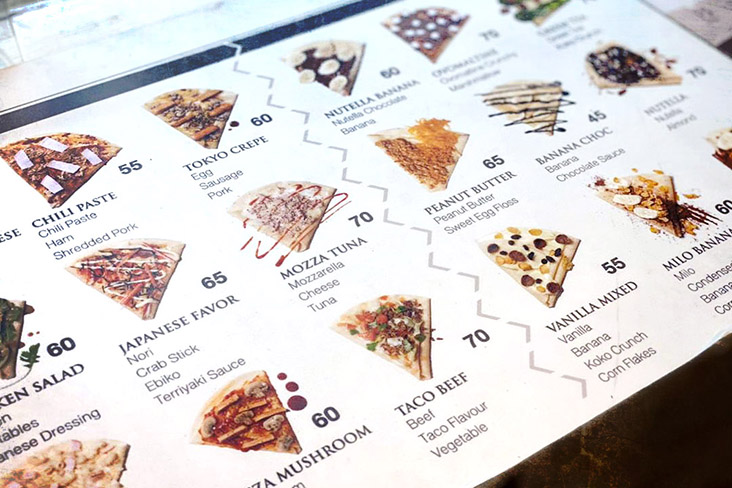 A diverse crêpe menu, with both sweet and savoury options.

Yet a peanut butter and banana crêpe is our de facto order. It’s not even on the menu, be it the Thai or English one, but the crêpière knows what we want; become regulars and she will start ladling the batter when she sees you approaching the shop.

There’s a hypnotic rhythm to the way the crêpière would then use the wooden crêpe spreader to form a thin disc of the batter on the hot griddle. Already we can smell the toasty notes of what constitutes a classic pancake mixture: Flour and water. Eggs and milk. Some salt, some sugar. And lots of butter, please.

It’s easy to see how the months have passed: now the crêpière’s jet-black hair is dyed an amber gold; some days she wears rings, others none. But the apron, we observe, stays the same. Perhaps crêperies, just like the kitchens of busy restaurants, are places of superstition; it never hurts to have a lucky charm.

Perhaps that is why we rarely waver from our choice.

Why not try the mozzarella and tuna, one might suggest, as though dairy and fish are natural companions. How about the purportedly Japanese influenced blend of crab sticks, ebiko (shrimp roe) and nori seaweed, drizzled with teriyaki sauce? 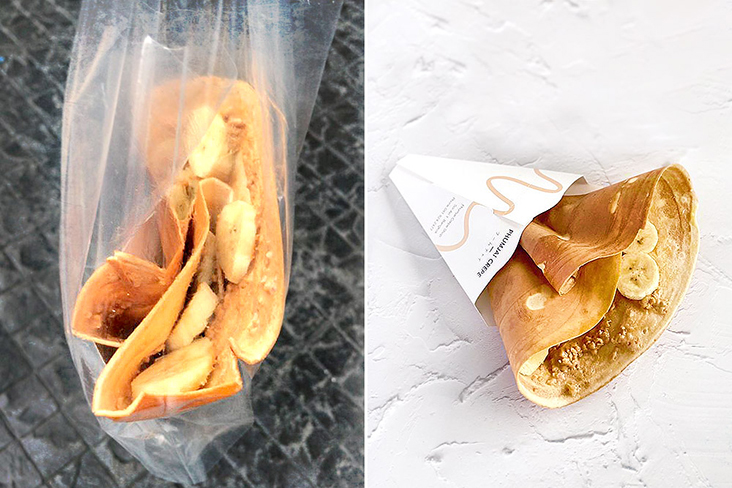 Takeaway peanut butter and banana crêpe, to enjoy in the comfort of home.

Ah but peanut butter and banana will do the trick; it always does.

Also, fake crustacean flesh probably isn’t the best accompaniment for a cup of freshly brewed coffee and that is what we’re planning to have with our crêpes.

It has become part of our crêpe ritual, assembling the paraphernalia: a Clever Dripper, for we are too lazy to mess around with the pour rate of hot water; a wooden scoop from Tokyo for measuring coffee beans; a grinder with a ceramic burr, to get the appropriate size of grounds; and unbleached filter paper that we wet with the hot water, to rid of any paper taste.

The takeaway crêpes stay hot and crispy, even in the time it takes to brew a small pot of coffee. This is a quiet time, then, for sharing crêpes and coffee in Bangkok, for satisfying cravings, for gratitude for all the things we are blessed with, wherever we may find them.

Tok Mat: Johor BN needs to secure 20 out of 26 parliamentary seats for GE15