A changing KL neighbourhood: Jalan Batai shops keep up with the times

KUALA LUMPUR, Jan 9  — Built in the 1970s, the two rows of shophouses on Jalan Batai, Damansara Heights hold immense sentimental value for its long-term patrons and tenants, who were all part of a close-knit community.

One of the first to open here was Ariff Marican, 71, who started Kiddies Store here on July 1972. “We were the first tenants together with Hock Lee’s Supermarket.”

He recalls that when he first opened, there wasn’t even a proper road in front of his store that sold imported children’s toys. Try the meatball noodles with the tender sausage and pork meat balls. — Photo by Choo Choo May The swankiest coffeeshop in town has custom-made round tables. — Photo by Choo Choo May 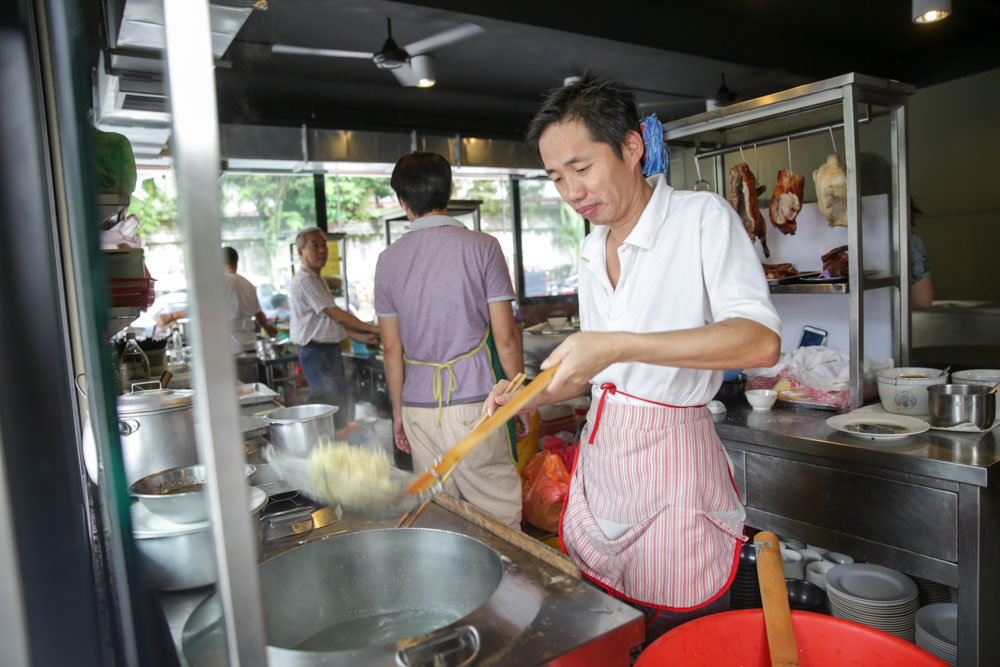 The relatively newcomer is Chua Chee Kwong who runs the wantan mee stall. — Photo by Choo Choo May The florists at the front row of the shophouses will be relocated after Chinese New Year. — Photo by Choo Choo May 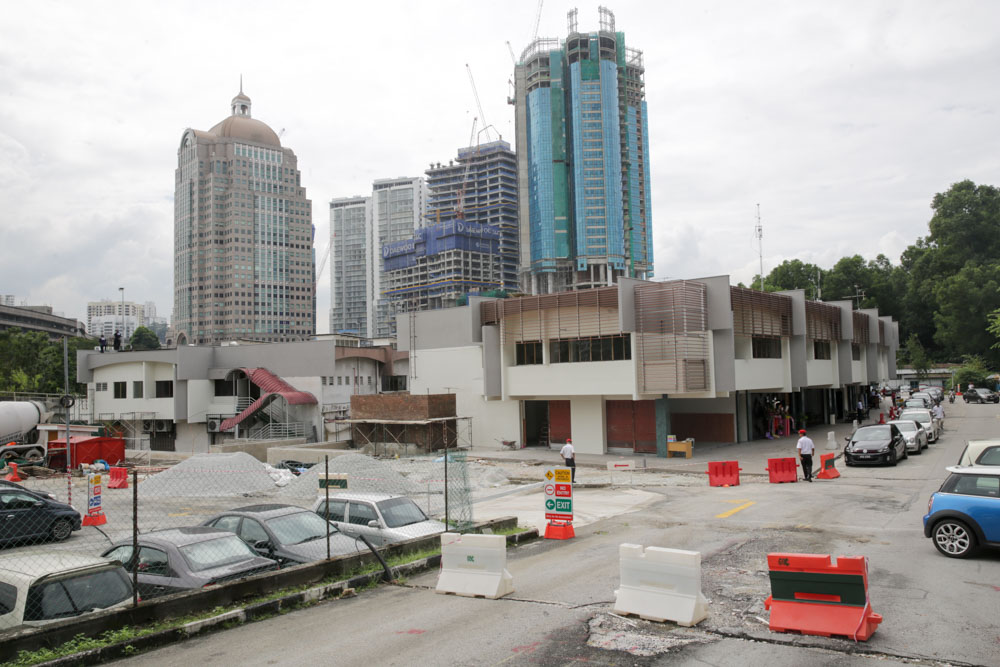 The Batai shops will be managed under a centred management strategy with landscaped common areas. — Photo by Choo Choo May The back row of the Batai shops will focus on F&B with a mix of new outlets and refurbished existing tenants. — Photo by Choo Choo May 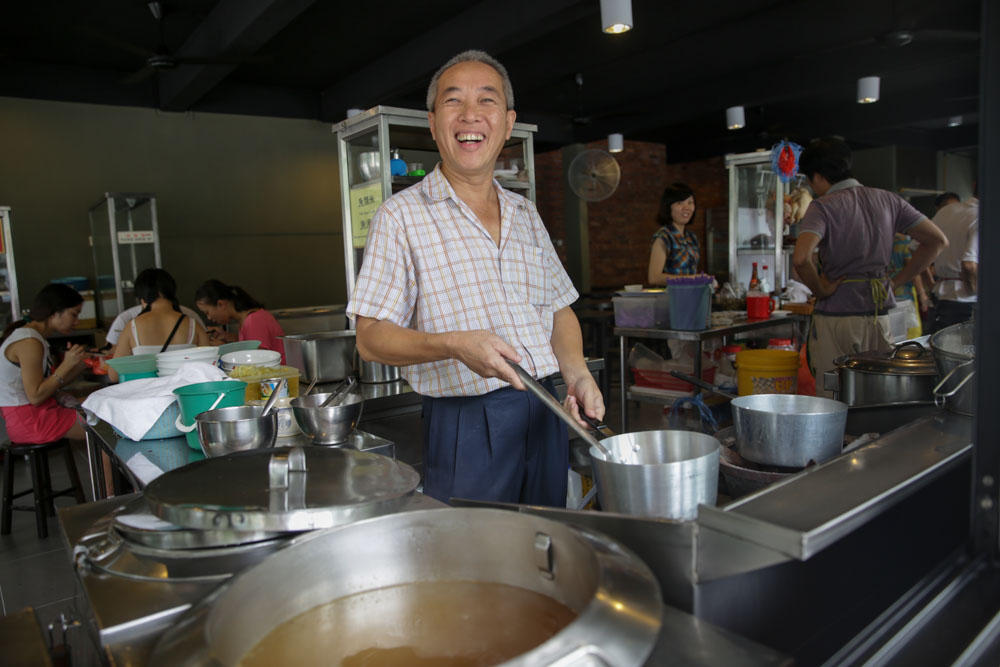 Tan Thiam Poh decided to give up his tai chow business and sell fish head and fish paste noodles here. — Photo by Choo Choo May

Tables and chairs can be placed at the walkway of the restaurant while an outside al-fresco area is intended for a nighttime tai-chow concept. — Photo by Choo Choo May Order curry mee and pan mee from the first stall at Restoran Shangri-La. — Photo by Choo Choo May Not many regulars know that the coffeeshop has reopened. — Photo by Choo Choo May 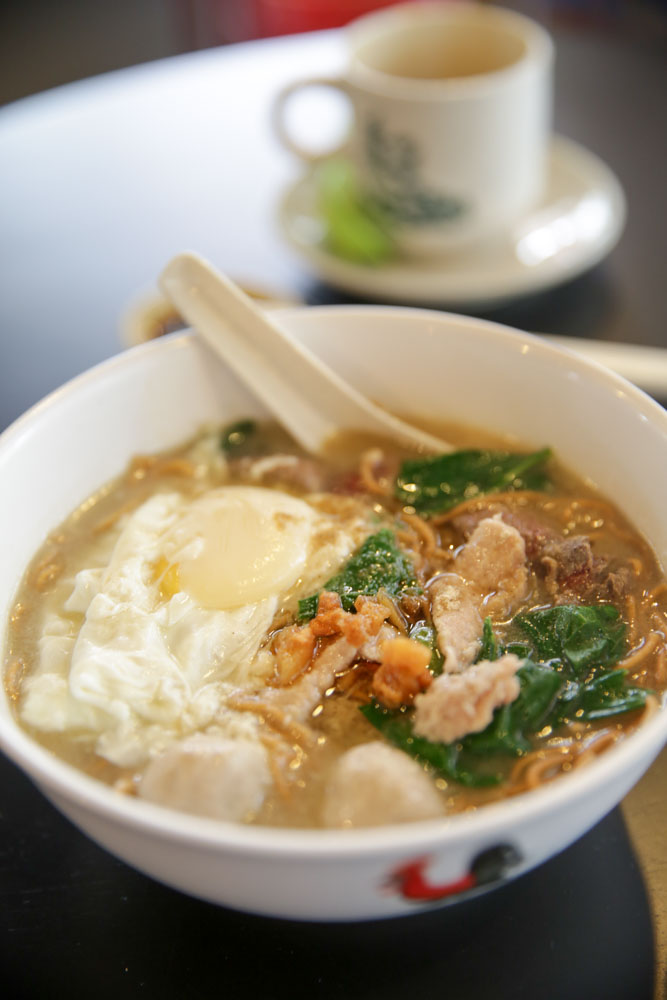 Mui Chea's luscious pork noodles with an egg. — Photo by Choo Choo May Lai Weng Choi runs the pan mee and curry mee stall with his wife. — Photo by Choo Choo May 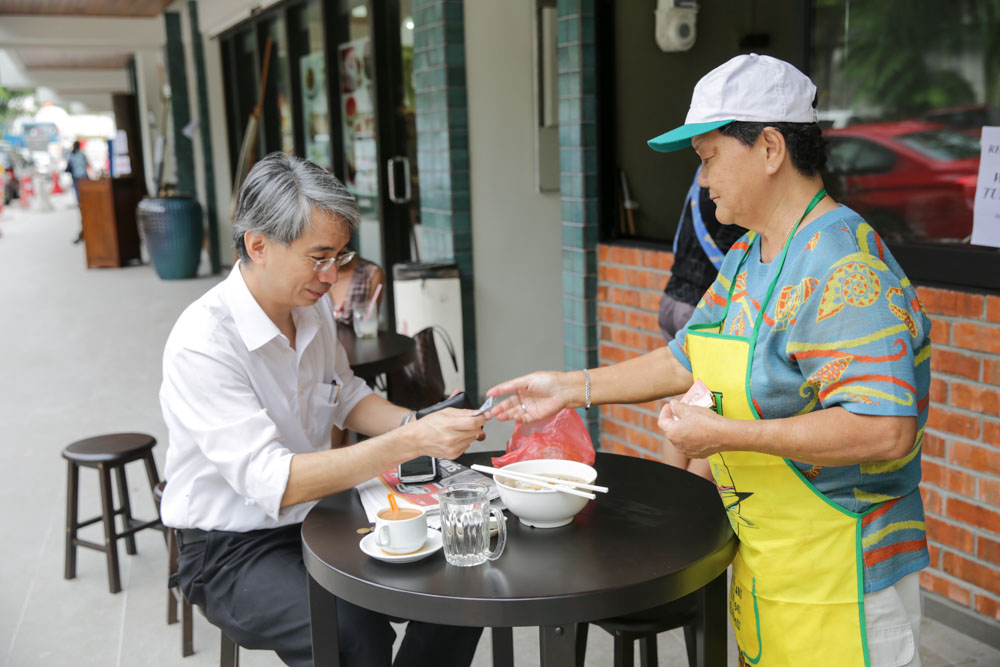 Lim Swee Chew or _Mui Chea_ helps out her son at the pork noodle stall. — Photo by Choo Choo May 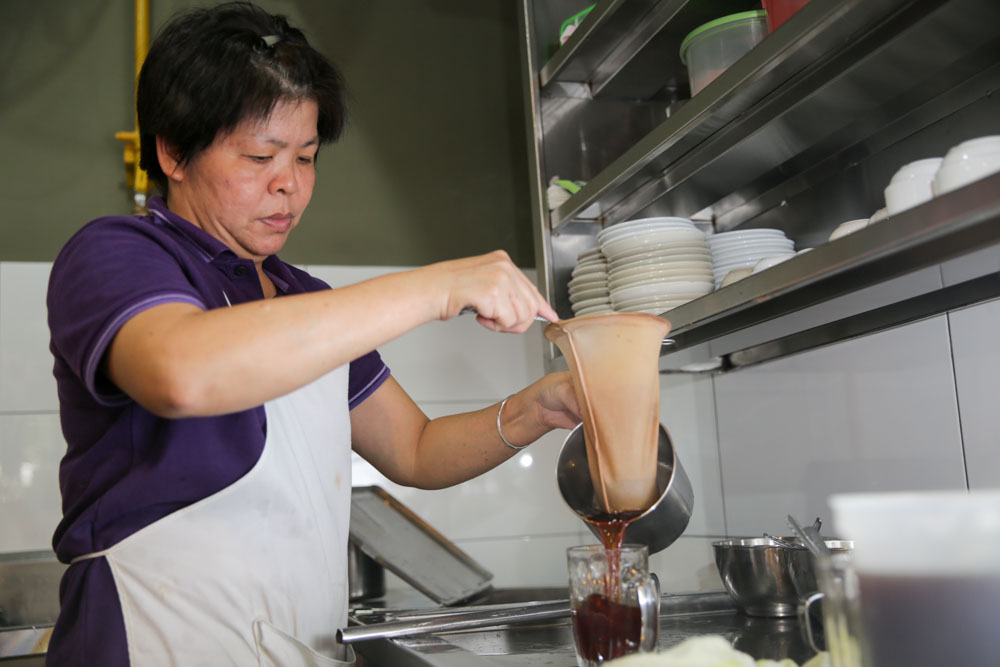 Chong Keok Ying makes the drinks for customers. — Photo by Choo Choo May

According to Selangor Properties Berhad, the ground floor of the front row of shophouses will be taken over by a key retail group with an upmarket grocers. — Photo by Choo Choo May 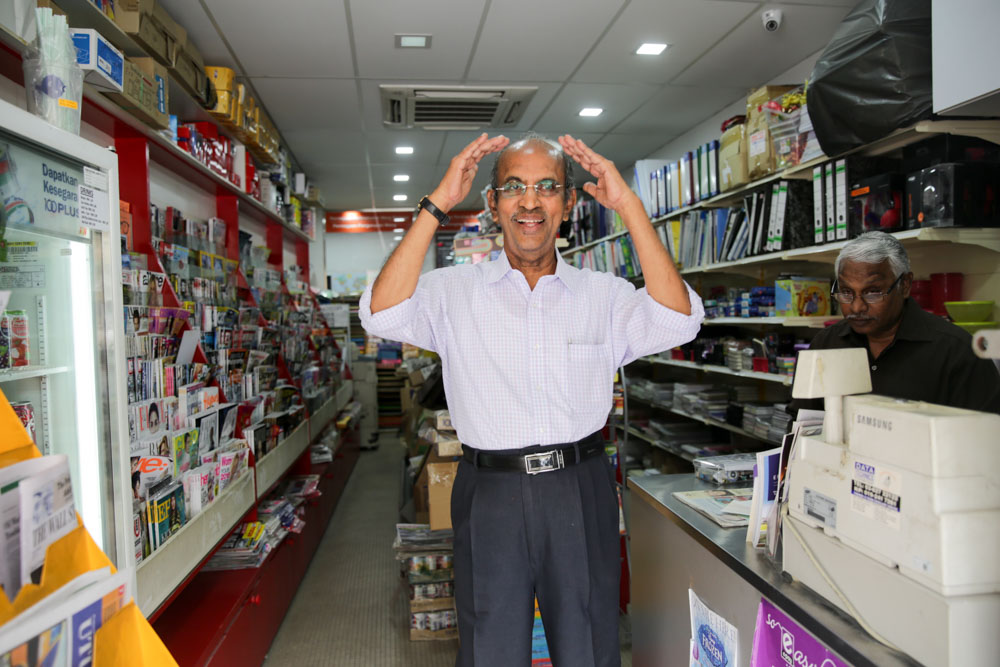 Ariff Marican recalls when he first started Kiddies Store here in the 1970s. — Photo by Choo Choo May

In the old days, he dealt with Puan Sri Chong Chook Yew from Selangor Properties Berhad (SPB), the owner of the shophouses. He recalls how she would say to him that the 16 shops were like her children and she did not want to break them up.

Starting as far back as late 2013 though, the Batai shops have seen closures and relocations, as initiated by SPB. The well-loved middle coffeeshop Restoran Seng Lee closed its doors by the end of December 2013 after their tenancy was terminated.

Later, the two stalls from that shop selling pork noodles and char kway teow moved to the corner coffeeshop Restoran Shangri-La. The wantan mee stall struck it out on their own, opening their own place in Sri Hartamas called Restoran Jie Mee.

Tenants like Kiddies Store and Hair Sculpture renegotiated new tenancy terms: sharing one shop together. The hair salon had relocated from the front row to the back row. Others like Mister Dhobi and mamak restaurant Restoran Ajmeer Baru decided to move away.

Last September, SPB embarked on a major renovation exercise for the Batai shops. “We believe it’s our duty to regenerate and uplift the shops that have been in existence for more than 40 years,” explains Cecilia Khor, SPB’s Head of Asset Management & Marketing. They hope to wrap up the exercise by Chinese New Year. .

This exercise includes a repositioning of the Batai shops’ tenant mix. The front row of shophouses saw a major upheaval. Cecilia confirms that a key retail group will be taking over the entire ground floor of the front block. “It’s an F&B group with an upmarket grocer and this will take place in the next couple of months.” The upstairs floors of the block will contain retail elements with a slant towards personal care, like spas, facial and beauty salons.

Making way for the new tenants, the iconic Hock Lee’s Supermarket that has traded here for more than 40 years closed its doors on December 31. As of yesterday, there still remains three tenants open for business on that side: Cheri Pink, Damansara Florist and Chez Rose European Restaurant.

According to florist Annie Wong of Cheri Pink, they will close their business on February 26 and shift to a temporary space in the back row.

Based on a verbal conversation with an employee at Damansara Florist, they will be shifting to an undisclosed location after they close at the end of February. An employee at Chez Rose was unable to comment on their plans.

SPB also advised that the back block of shophouses will be focused on food and beverage. “We have introduced the inclusion of new restaurants, like a Japanese restaurant (Torii). An all-day dining concept for a 2-storey cafe will be taking over the corner lot.”

Based on discussions with SPB, the all-day dining cafe is a new concept by the team behind Publika’s The Red Beanbag. SPB is also currently in talks with existing restaurant operators to introduce a Thai as well as a Vietnamese restaurant here.

When SPB decided to open up the tenancy for the Batai shops, a long list of people approached them for a space here.

As part of the renovation, the back row has seen its walkway extended for the comfort of the customers. SPB will also manage the Batai shops using a central management strategy.

A team of people will also be appointed to look after the day-to-day operations at the shops. In accordance to the plans, the common areas will also be landscaped to create a more “green” environment. “We’re keeping up with times too,” says Cecilia.

Existing tenants like Cheers Pub and Slices and Spices will also be uplifting their facade. “All the existing tenants must put in an effort for a refreshed look. In terms of signage, there’s also a new set of standard guidelines to follow,” says Cecilia.

With regards to carpark spaces, there’s currently a total of 195 lots available. SPB has also terminated previous season parking contracts to free up more spaces for the patrons of the Batai shops.

On January 6, the corner coffeeshop Restoran Shangri-La opened its doors, a fact not known to many since it is hidden from the main road.

According to SPB, they decided to maintain the existing coffeeshop because “the last 40 years, the business has many loyal supporters.”

Yong Hooi Neo and his wife, Chong Keok Ying are the main tenants for the coffeeshop having taken over about 20 years ago from the previous tenant.

The couple who run the drinks stall estimate spending a sum of RM200,000 to rejunevate the place from the customised tables and chairs to installing a central exhaust system.

Understandably, prices have also been increased – 20 to 50 sen for the drinks while the other stall owners have increased their prices by RM1 for a bowl of noodles to cost around RM7 to RM8. According to Chong, their regulars don’t complain knowing their dilemma but it’s the office workers who are not happy with the price increase.

All the previous stalls from the corner coffeeshop have reopened with them except the char kway teow and chicken rice stalls. We understand that due to the three-month renovation exercise, these stalls have decided to open elsewhere.

The char kway teow stall, previously from Restoran Seng Lee, is said to have opened their own shop at Setia Alam. Chong tells us she will be looking for new tenants to take over those stalls.

Plans are also underway to source for a tenant to take up the al-fresco part of the coffeeshop for tai chow.

One of the oldest stalls in the restaurant is the pork ball “sam kan cheong” noodle stall run by Lim Fook Chai that has been there for 15 years.

Give their meat laden noodles a try especially the flat pork balls sourced from a manufacturer. Unlike the generic versions, the flat pale pork balls are tender to the bite, since they are made from lean pork meat.

The fish head noodles stall run by Tan Thiam Poh is also popular with regulars. He gets up as early as 5am to source his fresh fish from the market and prepare it for the noodles.

For the pieces of fish head, which is either deep-fried or served on its own, he uses Song fish. Their fish paste is also homemade, using mackerel fish or “kay yee.”

The pan mee and curry mee stall have been here for three years. According to Lim Bee Ling, who runs the stall with her husband, Lai Weng Choi, their stall was previously located at The Mall’s fourth floor food court (popularly known as Yaohan food court) for around 25 years.

A relative newcomer is the wantan mee stall run by Chua Chee Kwong who only started last March. He had taken over the stall previously run by Hong Kee char siew wantan em  when the owners decided to retire. Previously manning a tai chow in Cheras, he prefers to open a wantan mee stall since he doesn’t have to hire so many workers.

Batai regulars will recognise old timer Lim Swee Chew or Mui Chea who used to run the pork noodles stall at Restoran Seng Lee. Nowadays, her son, Hu Kah Hing cooks up their slurpworthy pork noodles at the back of Restoran Shangri-La as his parents assist him.

Even those who peddle from their vans outside the coffeeshops are affected. We understand that Penang rojak stall operator Chee Ming Kong who used to park outside Restoran Seng Lee decided to call it a day.

Last year, he had to give up the space he used to cook his rojak sauce for the stall. Similarly, the van that sells fritters and cut fruits near Restoran Shangri-La will also have to relocate.

Chong tells us that she will be allocating a stall inside the coffeeshop for the van owner to sell cut fruits.